Home » Heritage » Look at the Filigree! 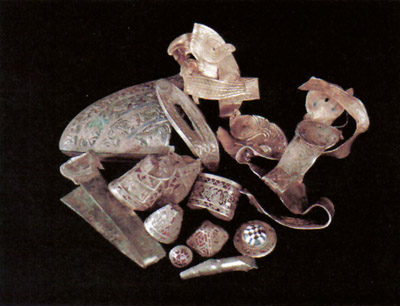 This hoard should give rise to a welling-up of pride from the people of the Midlands! At last we can claim our heritage with equality (and possible superiority) from the archaeology of the south.

Because we, here, in the Midlands, are the origins of England. I suggest that the reason England is so named, and not called Saxonia, Juteland, or Wessexia is because the origin of this nation lies with the Angles – the Tribe of which the Mercians were members – who stretched from the Norfolk and Suffolk coast to the borders of Wales.

It is possible (because there is evidence of Brythonic (Welsh) names surviving in this area) that there was a mixture of two groups.

Metallurgy might suggest that there was a strength arising from a small proportion of Welsh making an alloy of human resilience.

It is known that the surviving celtic kingdoms of North Wales/Cumbria were predisposed to ally themselves with the Mercians, although according to the Venerable Bede’s Historia, King Penda (the first high king)’s final demise occurred when this broke down.

‘Angle’ Land is the natural name for our space – only a slight step from Angland, and thereby England. The rest of the country considered themselves Saxon – apart from the Jutes in the Isle of Wight, and Kent.

We have not had due recognition of the origins of our country’s unity here because our history (assuming that it was written in Lichfield) could not have survived the later Danish invasions and occupation. Written history only survived in Wessex, Northumbria, and Wales.

Because of that we do not get the recognition that those areas, naturally, accord themselves. They could not, however, change the name that the country had by then chosen! Our beginnings as a state are in a mass of competing kingdoms, but the gravitational pull indicating a Mercian origin continues for another 150 years to King Offa – descendant of Penda’s daughter.

Pope Adrian decided to write to the Emperor Charlemagne and in the letter he referred to King Offa as ‘Rex Anglorum’. The Emperor then referred to his ‘brother Offa’ in response to trading letters sent to England, a sure sign of our King’s pre-eminence.

It is accepted that Offa’s writ extended over London, Kent, Wales and Wessex, (most of England) but is disputed over Northumbria. Perhaps that stems from his ancestor King Penda’s final demise at the battle of Winwaed when the Bernician army rampaged through Staffordshire.

Would that not be an appropriate time to bury treasure quickly?
Incidentally Charlemagne wanted one of Offa’s daughters for his son in marriage, but Offa suggested that his own son should marry Charlemagne’s daughter ‘Bertha’. The Emperor felt this was insulting, and a coolness to ‘Francia’ that lasted for a thousand years began!

Perhaps we can go further on this amazing find. It should also give rise to theories of origin. Too often we are kept from thesis and not allowed to progress because of expert reticence. Therefore (expecting antithesis sooner, not later) I suggest that this hoard might be that of King Penda (a Pagan), collected after the battle of Hatfield Chase in 633.

This was the battle at which general (?) Penda of Mercia defeated the Northumbrians (and their Christian King Edwin) and established his, or Mercia’s, pre-eminence over the Midlands and North.

What evidence is there for this assertion?
The hoard is essentially masculine – there are no signs of femininity (pendants broaches etc.) and basically seem like the products of a quick wartime removal. The Cross has been violently removed – probably from a stave. It could, before that, have been borne before the doomed troops of King Edwin. There are no signs of respect – probably the opposite. This indicates a pagan people, and their victory over a Christian army.

For further reading I suggest Zalukyj and Zalukyj, The Age of Mercian Supremacy. The ‘Anglo-Saxon’ Hoard is on show at Birmingham Museum and Art Gallery.