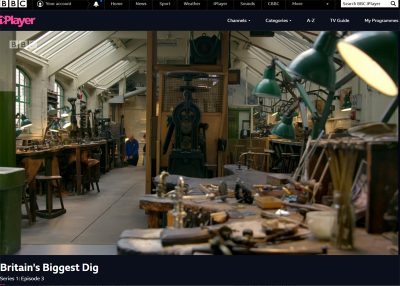 How many noticed the excellent feature on our own Museum of the Jewellery Quarter during episode 3 Britain’s Biggest Dig on BBC at 8pm 29 September 2020, and repeated at various times, and now available on iplayer. Broadcast at a time when the museum is still unfortunately closed due to COVID-19, it reminded us what a gem it is in the Jewellery Quarter!

The prgramme is offically described as ‘How working-class Victorians made Birmingham one of the most important industrial cities on the planet, why some skeletons have mysterious cut marks on them, and the rise of the real Peaky Blinders.’ It also mentions signs of common injuries in the workplace including repetitive strain injuries and watch those fingertips in the press/dropstamp room!

Coverage on the JQ Museum starts about 21 minutes into the programme and lasts about 6 minutes, then 10 minutes from the end Carl Chinn says that the Peaky Blinders story is more or less a load of rubbish, but there were gangs – lots of them!!!

The programme is only available until around 21st October so don’t hang around to watch it, it made us want to visit the museum yet again!

Tags: Museum of the Jewellery Quarter