Home » Heritage » Cash to Bring Cemetery Back to Life 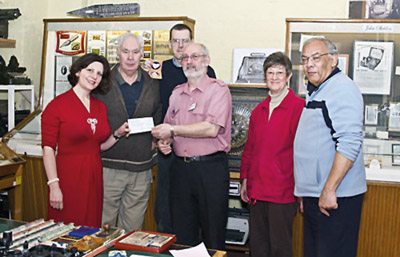 A cash windfall will help reverse the devastation caused to an historic Birmingham landmark by “health and safety madness”.

The Friends of Key Hill and Warstone Lane Cemeteries have received a cheque for £4,000 from Service Birmingham, the company which provides the IT for Birmingham City Council.

The Friends are painstakingly restoring this significant Birmingham landmark which was nearly destroyed by the local authority ‘toppling policy’.

Council safety officers ordered hundreds of headstones to be pushed over in 2004 to avoid litigation in case masonry ‘fell on’ someone. Then the cemetery became a black-spot for rubbish dumping and graffiti.

The Friends have now cleaned up the area and are helping families find the graves of their ancestors. Their aim is to restore a green space in the heart of the Jewellery Quarter to be enjoyed by residents and workers in the area.

The cheque was presented to the trustees by Mrs Maddy Westrop who successfully applied for funding from her staff benefit fund. “This historic treasure was nearly lost because of health and safety madness,” says Mrs Westrop. “I was so glad to do something to rebuild Birmingham’s heritage that was almost lost.”

A spokesman for the Friends, Brian Southwell, said: “This is a fantastic bonus in this time of increasing cut backs, allowing some of the larger Victorian monuments to be restored to their former glory, as well as guaranteeing the successful continuation of the restoration programme for the near future.”

The cemeteries contain the remains of every sort of Birmingham resident. One grave contains the remains of an aborigine who came to England in Victorian times and died in the cold climate.