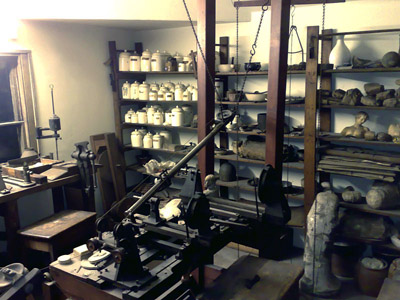 A new exhibition at the Science Museum in London displays the original attic workshop of James Watt.

Watt played a significant role in Britain’s emergence as the first industrial nation. He was a skilled scientist and engineer and had a longstanding partnership with fellow entrepreneur Matthew Boulton, founder of The Birmingham Assay Office.

When Watt died in 1819, his Birmingham workshop was locked and its contents left undisturbed. Then, in 1924, the complete workshop, including 8,434 objects used or created by Watt, were carefully removed and taken to the Science Museum. Although the workshop has been displayed previously; visitors have never been invited to examine all of its contents until now.

The Birmingham Assay Office is proud to be associated with this fascinating piece of history and has lent several pieces associated with Boulton and Watt to be included in a new gallery of previously unseen objects. Amongst the silverware the loan of most historical significance is the functional Droz collar, named after its Swiss inventor Jean Pierre Droz and used in the production of coins.

Boulton and Watt discovered the mechanism on a trip to France in 1788 and brought Droz back to Birmingham to assist in the development of the Soho Mint. Prior to this, most coins were struck by hand presses. They were not necessarily regular in diameter and could be uneven and misshaped. The collar or ‘plateau’ which Droz designed acted as a third die that worked in addition to those stamping text and imagery on the two sides of a coin or token.

The collar was used to enclose the blanks so that both faces and the edge of the piece were all struck with the same blow of the coining press. The edge could be plain, patterned or have an inscription engraved on it.

In fact Droz’s six piece collar proved unsuitable for mass production of coins and was soon restricted to use for proofs and medals.

However, the design was modified by James Lawson in 1790 creating a single piece collar which produced coins that were perfectly round and of equal diameter for the first time ever, giving rise to our modern coinage.