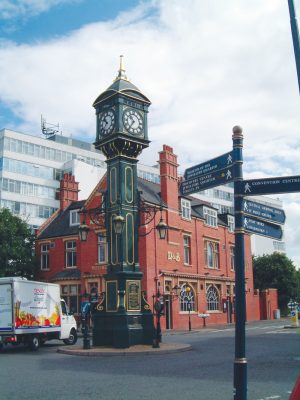 Local businesses, residents and visitors to the Jewellery Quarter are invited to share memories, stories and photographs relating to the Chamberlain Memorial Clock.

They will become part of a new archive relating to the monument, which is currently being restored thanks to a project led by the Jewellery Quarter Development trust, funded by JQBID and JQ Townscape Heritage Project, a National Lottery Heritage Fund scheme.

The Chamberlain Memorial Clock has stood tall in the Jewellery Quarter since 1903, when it was built to mark Joseph Chamberlain’s tour of South Africa. Made by Birmingham firm W. F. Evans & Sons of Handsworth, the cast iron structure has become an iconic landmark of the area, familiar to many generations of local workers, residents, visitors, and Brummies’ from across the city.

The clock is currently being restored at the workshops of Smith of Derby, historic clockmakers with over 160 years of experience in their field. Works include extensive operations to restore its internal workings, clock face and tower as well as reinstatement of the bell.

The clock is expected to return to the site at the junction of Vyse Street and Warstone Lane in early 2021. There will be a new information panel installed near to the clock to share its history, and the history of its namesake Joseph Chamberlain, with visitors.

There will also be a web resource with research, films, photographs, and oral histories relating to the clock.

The JQ Townscape Heritage project is inviting people to share their memories of the Chamberlain Clock to form part of an oral history archive. They want to hear from workers or residents (past or present) who have known it for a long time, those who have personal stories relating to the clock or maybe from people that may remember the previous restoration in 1990. Any photographs that feature the Clock would also be welcomed.

“We would love to hear from people who have memories in which the Chamberlain Clock features. It’s a well-known icon of the Jewellery Quarter, so we are keen to hear how it has played a role in people’s lives however big or small!

We’d love to hear stories of the clock as a meeting place for first dates, nights out, work, jewellery shopping – these are a few examples, but I am sure there are many more.

The stories will become part of an archive which will celebrate the clock as a local landmark so that future generations can learn about its significance in the community.”

People are invited to get in touch with Kate O’Connor: for an initial discussion if they would like to take part.

The oral history interviews which are collected through the call-out will become part of the Jewellery Quarter People’s Archive which aims to collect and preserve the memories of ordinary people who have lived, worked in, or visited the area.