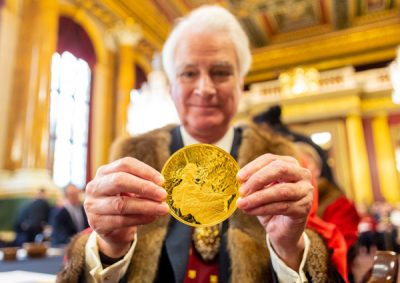 The Queen’s Remembrancer, Barbara Fontaine, on 3rd May announced that the Chancellor has passed the annual Trial of the Pyx – one of Britain’s oldest judicial processes – which tests the quality weight, composition and diameter of the coins people carry in their pockets or collect as commemorative coins.

Prime Warden Michael Prideaux of The Goldsmiths’ Company, highlighting the relevance and importance of the Trial of the Pyx today, said: “Amidst all the uncertainty in our national life, there’s real value in assuring people that at least we can be confident about the soundness of the coinage. Hallmarking really matters to the Goldsmiths’ Company.

Our centre of gravity is our trade and we never forget that the word ‘hallmark’ comes from a mark made at our hall – the Goldsmiths’ Hall.

The substance of hallmarking and the Trial of the Pyx, as distinct from the pageantry, represents not just history but the here and now.”

At the verdict, a jury comprising of members of the Goldsmiths’ Company confirmed that British coins have met the regulatory standards for another year running. Historically, if the coins failed, the punishment for the Chancellor – who is also the Master of the Mint – has been severe, from the loss of a hand to a stint in prison!

The verdict marks the end of a three-stage process which started in January when a jury of goldsmiths carefully counted and weighed a selection of new coins.

Over 10,600 Royal Mint coins went on ‘trial’ at Goldsmiths’ Hall in the City of London this year, the home of the Goldsmiths’ Company – one of the twelve major Livery Companies of the City of London – who have been responsible for proceedings since 1580 and for testing the quality of precious metals since 1300. The trial fulfils a legal requirement imposed by an Act of Parliament (Coinage Act 1971) to conduct an examination by jury to ascertain that the coins of the realm, produced by the Royal Mint, are of the correct weight, size and composition.

The trial jury is a formal court of law summoned to the Goldsmiths’ Hall by the senior judge in the Royal Courts of Justice, known as the Queen’s Remembrancer – one of the oldest judicial post in England and Wales.

Anne Jessopp, Chief Executive of The Royal Mint said: “We are delighted that the coins submitted to this year’s Trial of the Pyx ceremony have passed.

The Trial of the Pyx has always been, and continues to play, an extremely important role, supporting The Royal Mint’s reputation for excellence in production.”