Birmingham artist Wayne Attwood has been elected President of the Royal Birmingham Society of Artists, following the organisation’s annual general meeting. “I’m honoured to be elected,” says Wayne, who was previously Vice President. “I hope to do as good a job at Robert Neil, the outgoing president.”

Wayne Attwood splits his time between painting in the UK and the Mediterranean. His work is represented in private, corporate and public collections across Europe. He has exhibited in numerous solo and group shows including the RBSA Gallery and Mall Galleries.

Walter R Sickert once wrote that: “the most fruitful course of study for the painter” lies in a persistent effort to render the magic and poetry which they daily see around them”. When looking for inspiration, this quote always seems to come to Wayne’s mind.

The primary aim of his painting is to capture the atmosphere and culture of the everyday environments we inhabit, as he perceives or experiences them, which is why he is continually drawn to urban, social, industrial and cultural subjects as a motif.

There resides a fascination with how we are connected through a mutual experience of these shared urban spaces.

Although draughtsmanship is fundamental to the work, he doesn’t necessarily wish to produce an accurate topographical documentation, but rather capture an emotive, perceptual ‘sense of place’.

Realism is not the intent. Working from direct observation, he creates a series of drawings and studies which are then used to design and produce studio paintings; not tending to use a single source of reference but refer to various sources for each painting. 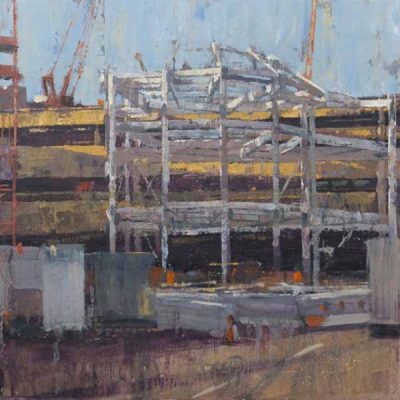 In 2004 he left the UK to sail with his wife, on their 35ft yacht ‘Hitrapia’, around the Atlantic and Mediterranean coasts of Europe, rediscovering his passion for painting. While travelling, Wayne spent an extended period in Malta, producing a body of work devoted entirely to this group of enchanting and historic islands.

He has participated in various exhibitions in Malta – presenting a solo show in Valletta and, as an invited artist, in exhibitions for The Prime Minister of Malta (2013 and 2014) and The President of Malta (2013, 2014 and 2015). He has also completed a number of commissions, including a painting for Dr Austin Gatt, Maltese Minister for Infrastructure, Transport and Communications.

Prior to becoming a full-time artist Wayne was Creative Director of a national advertising and marketing agency. He undertook projects across the UK and Europe for corporations such as Coca-Cola, Disney, BBC, Film4, Sky TV, Kodak, Thomas Cook, Barclays Bank and Diageo/Guinness to name a few.