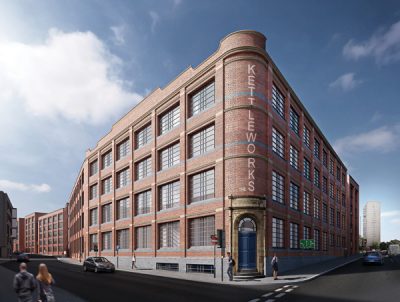 Chancellor of the Exchequer, Philip Hammond, has praised the Kettleworks development after a tour of the construction site in the Jewellery Quarter.

The Chancellor and Mayor were shown round the site by Phil Carlin, Managing Director of Seven Capital, and Andy Robinson, CEO of Colmore Tang.

The new flats are expected to be open by the end of the year on what was the old Swan Kettle Factory.

The Chancellor’s visit comes hot on the heels of a pledge £350m in his Spring Statement towards new homes and regeneration in the West Midlands.

This will include the building of 1,000 homes at the Commonwealth village at Perry Barr which will be used as social housing once the 2022 Games are over. 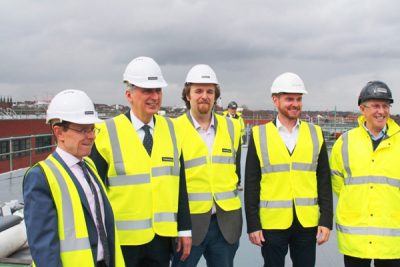 Mr Hammond said: “The Kettleworks Development looked fantastic and is a prime example of the private sector playing an important role in regeneration.

“Both the Government and I want a successful Birmingham and it is important we have high quality private and public housing for people in the city.

“This will help the city be seen as more attractive for business and skills and the Government supports Andy Street in his ambition to make the West Midlands a hub for economic growth.”

Andy Street added: “I was delighted to invite the Chancellor for sneak peek at the Kettleworks development and many thanks to the Seven Capital team for giving us the guided tour.

“When up and running, the accommodation will be a fantastic addition to the Jewellery Quarter and will complement the Government funded works we are doing to regenerate other areas of the city.

“Key to this is the £350m delivered by the Chancellor which will build hundreds of thousands new homes including the athlete’s village in Perry Barr whose legacy will be high quality accommodation for local residents.”