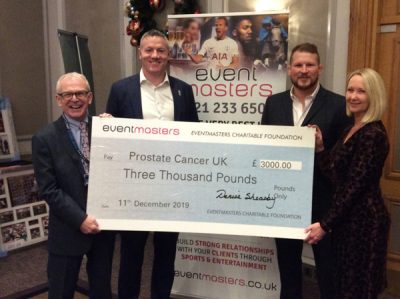 Sports hospitality agency Eventmasters (based in St Paul’s Square) has again raised thousands of pounds for charities in its annual fund-raising push.

Donations of £3,000 went to the respective organisations on behalf of the Eventmasters Foundation.

A further £3,000 was raised for Prostate UK by Eventmasters’ sister company silentauctionevents.com at the Birmingham Chamber awards dinner in March, it being then Chamber President Saqib Bhatti’s chosen charity for the year. 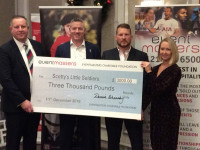 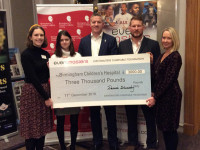 In addition, Eventmasters have also made a payment to Scotty’s of £4,500 to help mark a special milestone in the work of the children’s Armed Forces charity – the company will sponsor its 10th Anniversary dinner in November 2020.

A fourth charity to benefit is LoveBrum who receive £500. It engages with and supports local people and businesses to build an even better Birmingham.

Denise Sheasby, managing director of Eventmasters, said the company was “proud to do its bit.”

She went on: “We have adopted these four charities – they are very close to our hearts – they do fantastic work and we are simply pleased that we are able to help in line with Birmingham’s long-standing commitment to supporting the disadvantaged and those in need.”