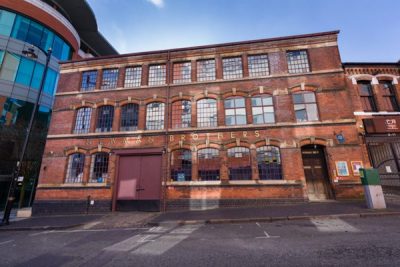 Coffin Works 1st Birthday
At the end of October The Coffin Works will be celebrating their 1st birthday party and this news roundup gives details about the recent awards they have won.

A Heritage Angel 2015 winner!
On Monday 7 September a mixture of staff (present and past), trustees, volunteers and professional team from The Coffin Works headed down to the Palace Theatre in London, courtesy of Lord Andrew Lloyd-Webber and Historic England for the glitzy heritage event of the year.

They didn’t win the category of ‘Best Rescue of an Industrial Building or Site’, but all was not lost…

Dame Esther Rantzen made their night when she announced that Newman Brothers Coffin Works was the winner of the Public Choice Award! “The BCT would like to take this opportunity to thank everyone reading this who voted for us. We are so proud to bring the award back for Brum!”

At the end of the same week they were celebrating again, with a party to unveil their Birmingham Civic Society Renaissance Award 2015 for the restoration of the Newman Brothers factory.

Crazy About Coffins
The latest exhibition at The Coffin Works is going down well with visitors! What coffin design would represent your life? There is a mix of real coffins from Crazy Coffins, based in Nottingham, and artwork designed by our local community. Free admission. Just pop along during their opening hours. Exhibition runs until 23 October.

The Coffin Works now has a Premises Licence and a ‘Pop-up’ Bar!
The Coffin Works prides itself on being a museum with a difference, and are also becoming a bit of a cool venue! They have just launched The Fittings Room, a Victorian tavern-themed bar in a gazebo!