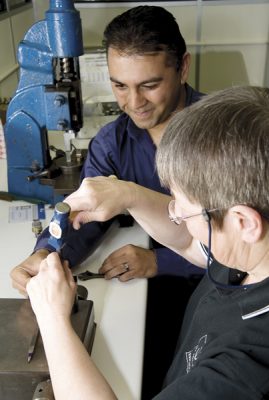 A commemorative platinum and diamond pendant designed by Manoj Parmar was the first piece of jewellery to be hallmarked at The WB Group’s recently opened Sub-Assay Office.

The piece which won an in-house design competition for staff, will be kept – together with designs from three runners up – in The Group’s archive as souvenirs of this historic occasion.

“We wanted all our staff to be involved in this exciting new initiative so we threw a competition open to the entire workforce asking them to come up with a commemorative piece, and were absolutely delighted with the results:” explains Domino’s Sales Director, Andrew Sollitt.

The brief was simply to design an item of jewellery that would commemorate the opening of the Sub-Assay Office whilst also representing the growth of The WB Group and its on-going development.

Manoj who is a Sales Administrator for Domino, (one of the two company’s – which with its sister company Weston Beamor Ltd – comprise The WB Group) based his winning pendant design on the iconic Anchor, the hallmark of Birmingham Assay Office.

The diamond-set ribbon wrapped around the anchor represents the close and on-going relationship that binds The WB Group to the Birmingham Assay Office which will staff and operate the Sub-Office from the Group’s premises in the heart of Birmingham’s Jewellery Quarter.

So where did Manoj, who is normally to be found at the end of the telephone line, get his obvious talent for design? “I did actually study at the School of Jewellery in Birmingham and have an HND in Jewellery and Silversmithing, so it is something I have done before: that said I was stunned and really delighted to win. I love design and hope to be able to do more. I guess you could say I’m a frustrated designer:” he said.

A love of design clearly permeates the Domino workforce as the designs produced by Manoj’s colleagues Claudie Barratt, Shavinder Dhanoa and Lorraine Nelson, all of whom are also in the sales team, clearly demonstrate.

“The standard was so high that we decided we would also make up Claudie’s ring, and Shavinder’s and Lorraine’s pendants and keep all four designs as part of our company’s rich and developing history,” says Sollitt.

Having the Sub-Assay Office is a tremendous additional facility for The WB Group and will mean that there is no longer the need to move jewellery to and from Birmingham Assay Office in order to have the hallmark applied.

“In these troubled times, the security benefits are a real bonus and whilst I hesitate to promise our customers a faster delivery, there is no doubt that having our own Sub Office will also simplify and facilitate our production processes,” says The WB Group’s MD, Andrew Morton.