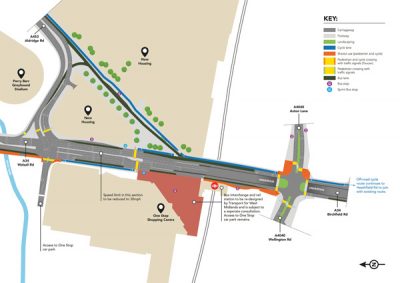 A programme of highway infrastructure improvements to open up the heart of Perry Barr and support the regeneration of the wider area is set to go out to public consultation.

The £27.1 million project – which includes the removal of the A34 flyover, the retention of the A34 underpass and the replacement of the A34/A4040 roundabout with a four-arm signal junction – was approved by Cabinet on February 12 of this year. In addition, there would be new cycling routes, improved footpaths, removal of subways and landscape improvements.

The scheme will now go out to consultation from June 3 to July 19, when people are invited to have their say on the proposed new road layout and other measures.

Councillor Waseem Zaffar, Cabinet Member for Transport and Environment at Birmingham City Council, said: “With 5,000 new homes set to be built in Perry Barr over the coming years, we need futureproof transport infrastructure to meet the demands of an increased population, with an emphasis on moving people rather than vehicles, reducing congestion which in turn will lead to cleaner air.

“As well as removing the flyover, this scheme will also deliver improvements for cyclists and pedestrians and will also be complemented by a package of related public transport improvements, such as enhancements to bus and rail provision, opening up the heart of Perry Barr and creating a cleaner, more sustainable environment for all.

These changes, which were agreed by Cabinet recently, are based on detailed research and modelling and will leave Perry Barr with a better transport network for the years ahead, making the area a place where people will want to visit, shop, work or live.

“I fully understand the concerns that have been raised locally but the A34 flyover needs to be removed for the maximum benefit to be achieved through the area’s regeneration. This is why we are now consulting on this project, so that we can hear people’s views on how this proposed new road layout will affect them, ensuring that we are then able to progress the best possible scheme for the area. I would urge as many people as possible to get in touch and let us know what they think of our plans.”

The simplest way for people to have their say, from June 3, is via the council’s Birmingham Be Heard consultation website at birminghambeheard.org.uk.