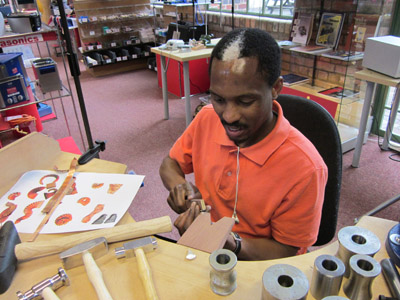 Suttons MD Maggie Nichols and Sales Director Geoff Field have completed their 300 mile sponsored cycle ride from London to Paris. Cycling over four days from 15 – 18 August, they were joined by goldsmith Paul Spurgeon and his colleague Nikki Wreford.

Whilst none were seasoned cyclists, they were determined to take on the challenge to raise money for the Cornerstone Project, which is providing jobs and skills for disadvantaged young people in Soweto.

Leaving from the National Sports Centre at Crystal Palace the foursome cycled 105 miles through the Kent countryside to Dover and then from the ferryport in Calais on to their hotel a few miles inland.

On day two they faced headwinds as they battled 75 miles into Northern France to spend the night at Abbeville. Day three brought blue skies and soaring temperatures and a further 65 miles to Beauvais. Day four (Saturday) brought the final stretch of 55 miles, arriving at the Eiffel Tower on the hottest day for ten years with temperatures up to 42C.

Maggie says, “We are raising money to help the Cornerstone Project in Soweto, Johannesburg, where six million people live in ramshackle poverty and employment is very hard to find. It seems appropriate, when so many jewellers in the UK have profited from the natural resources of South Africa, that we should put a little back to create jobs and skills and this is a fantastic opportunity to do so.” 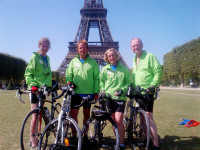 “A couple of years ago we met a young man from Soweto Nqobile Nkosi whose ambition was to be a jeweller. He had been befriended by UK goldsmith Paul Spurgeon on a visit to Johannesburg. On his return to the UK, Paul asked for help from contacts in the trade and Suttons happily donated some tools. With expertise and support from Paul, Nqobile has developed remarkable jewellery skills in a very short time.

Recently, he spent a two week internship at Weston Beamor in Birmingham. Using the skills he learned and a vacuum casting machine donated by Hean Studio, Nqobile is casting fine jewellery in Soweto.

Now 29, Nqobile provides work for three others in a workshop in his mother’s backyard and together with Paul has founded Cornerstone – a foundation to provide skills and employment for others in the township. The project has been given a plot of land by the chiefs and elders of a Zulu village on which he intends to build a small jewellery school.

It’s not too late to help or sponsor by sending a cheque (payable to MJ Nichols) to Sutton Tools, 91 Vittoria St., Birmingham B91 3NU or you can donate direct by BACS to: Cornerstone, A/C No 00735117, Sort Code 309399, Lloyds TSB, but please let Maggie know by emailing her at .