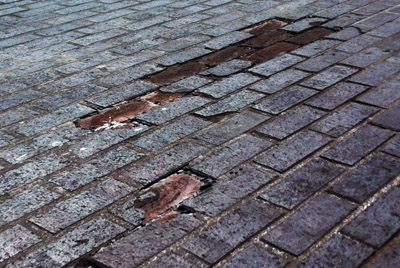 Several people have contacted us regarding the apparent break-up of some of the block paving at the newly constructed Dayus Square.

We contacted the City Council and a spokesperson replied as follows:

“I am aware of the issue regarding the block paving at Dayus Square: the problem is not the bricks, which are well suited to heavy loads and not susceptible to frost damage (as you can see by the good condition of many other such surfaces around the Quarter, some of which are a century old).

The defect is caused by the way the blocks were laid – the compound which anchored the blocks to the foundation layer has failed in some places, causing the blocks to move around under traffic loads and effectively to crush one another.

I picked up on this issue when the Square was first completed, and took the decision to wait for some months in order to monitor which parts of the crossings would fail and in order to allow the Engineers sufficient time to properly understand the problem. In recent days I have contacted the Constituency Engineer and requested a meeting to discuss carrying out full repairs and ensuring that the defect will not return – I will let you know when the repairs have been arranged.