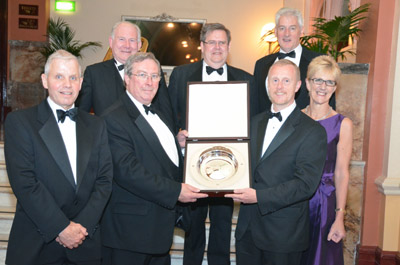 The British Hallmarking Council and the four Assay Offices of the UK are delighted to announce The London Borough of Southwark as the winners of the Touchstone Award 2014.

This is the third annual presentation of this prestigious award. The Touchstone Award recognises innovative initiative undertaken in relation to hallmarking legislation and this year’s applications demonstrated a wide range of different approaches.

Southwark’s operation was prompted by a complaint from a member of the public. An efficient response and a thorough investigation revealed a major fraudulent trading exercise, resulting in more than 1,300 items of jewellery being seized. Many were marked 925, but the Assay Office confirmed that the items were not silver. Further investigations revealed Hallmarking and Trade Mark offences, including counterfeit hallmarks.

Accepting the Award on behalf of Southwark, Justin Miller said, “We are very pleased with the outcome of this case and it is a bonus to be recognised in this way. As a result of the serious offences identified we will now be proceeding with a confiscation hearing under the Proceeds of Crime Act 2002.”

The joint expertise of the Trading Standards Service and the UK Assay Offices was essential in this successful operation. The Award is funded by the four UK Assay Offices and supported by members of the British Hallmarking Council.

Champion of the Touchstone Award for the British Hallmarking Council, Robert Grice, a long-serving Trading Standards Officer and staunch supporter of hallmarking, considers the award to be richly deserved. “Accolades for Trading Standards departments inevitably focus on prevention of activities which are potentially harmful to health or even life threatening, such as unsafe fireworks and counterfeit alcohol.

However, people ignoring the hallmarking legislation may be defrauding large numbers of the population, many of whom might be vulnerable and dependent on the value of their jewellery as an investment. Hallmarking legislation is a challenging area for Trading Standards Officers who constantly strive to ensure that the public are not being cheated out of substantial amounts of money,   he said.

The Award was presented to Justin Miller, from London Borough of Southwark who was heavily involved with the award winning enforcement project. Presenting the award at a glittering Trading Standards Institute Annual Conference Dinner in Harrogate, British Hallmarking Council Chairman Christopher Jewitt thanked Trading Standards professionals for their work in enforcing hallmarking and protecting both the public and the trade from unfair competition and fraudulent practice.

The London Borough of Southwark will be the proud custodians of the Touchstone Award for a year and their team will benefit from a free day’s training and an awards lunch at Goldsmiths’ Hall, in the City of London later in the year.