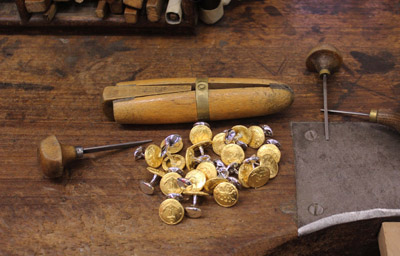 This year Deakin & Francis are proud to be celebrating a gem of an anniversary –with an impressive 230 years of jewellery design and manufacture.

To celebrate they are launching a unique, limited edition ‘230 Capsule’ collection of cufflinks.

As England’s oldest family jeweller, the company produce the world’s finest cufflinks and have never veered from the high standards of craftsmanship and quality that are its tradition.

With an incredible heritage, steeped in history, Deakin & Francis was originally founded in 1786. 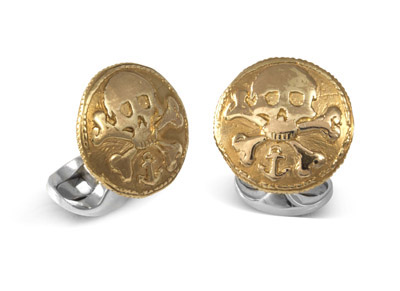 Skull & Cross bones – linking back to the heroic pirate attack of the 16th century, this is a reminder of the epic victory against the ferocious pirate attack. As an iconic part of the innovative Deakin & Francis offering, the capsule collection wouldn’t be complete without the statement skull design.

Family folklore has it that a distant 16th century ‘Dakyn’, a naval officer, was rewarded with the granting of the Deakin family crest for his heroic antics at sea.

Second in command on a warship, captained by a prominent British aristocrat closely related to the royal family, the ship came under attack by pirates. In a ferocious attack, Deakin braved the attack and saved the day.

Royal Britannia-Britannia, the female personification of the British Isles, has been a popular figure since the 1st century, when she was first depicted as a goddess. She was a firm fixture on coins from this point onwards and seen as a symbol of British unity, liberty and strength. As a British brand, the Royal Britannia symbol is the perfect way to represent that Deakin & Francis are very much proud to be British designers and manufacturers.

Deakin & Francis Building – the brand has been based in Regents Place, in Birmingham’s Jewellery Quarter, since 1786. Despite going through many changes, the company have remained in the same building that once had as its resident legendary James Watt –father of the Industrial Revolution, namesake of the unit of power and revolutioniser of the steam engine.

To this day, the story is one that inspires many of the brand’s designs – including their famous jaw dropping, eye popping skulls. And it was this historic tale that inspired the ‘230 Capsule’ collection.

‘We wanted our capsule collection to really tell the story of who Deakin & Francis is – tying in our history, whilst offering pieces that you would, of course, be proud to wear’ says James Deakin, Creative Director.

With six key designs, the cufflinks have been designed to replicate old coins – like the treasure the pirates were hunting for back in the 16th century.

Birmingham Anchor – as the hallmark of the Birmingham Assay office, the anchor is symbolic of the brands jewellery roots. The assaying of precious metals is a legal requirement and as a well-respected brand, Deakin & Francis are renowned for producing some of the world’s finest cufflinks and jewellery. The story goes that a group of men, including Matthew Boulton, was instrumental in setting up the assay offices in both Birmingham and Sheffield. In 1773 they used to meet in The Crown and Anchor public house and with the toss of a coin, land-locked Birmingham won the anchor as its hallmarking symbol, whilst Sheffield took the crown.

The Deakin & Francis crest – depicting a raised and armoured arm, clutching a hatchet and rising from a crown. The crest is a much cherished symbol still in use by the family business today

At the same time, we want our customers to treasure these forever – a fond reminder of our impressive past, but with the normal Deakin & Francis design twist to make these innovative, unique and special. All the things a capsule collection should be.’ 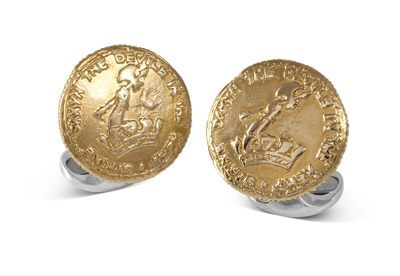 The Deakin & Francis crest – depicting a raised and armoured arm, clutching a hatchet and rising from a crown. The crest is a much cherished symbol still in use by the family business today

The sterling silver cufflinks have all been designed to replicate old coins. With a gold plated finish, they feature six unique, intricate designs that have a personal link to Deakin & Francis.

As with a coin, the wearer will even see that the back of the cufflink features the special, 230 commemorative dates.

“The coins are the perfect way to pay homage to our impressive 230th anniversary,” says Henry Deakin, Managing Director.

“We are immensely proud of the values and techniques installed by our ancestors and pride and care goes into every single piece of jewellery that we produce. 230 years is a massive achievement for any company and we are delighted to be able to celebrate this landmark of an occasion with this stunning collection and we hope our customers will enjoy wearing these unique pieces and continue to support us for the next 230 years!”