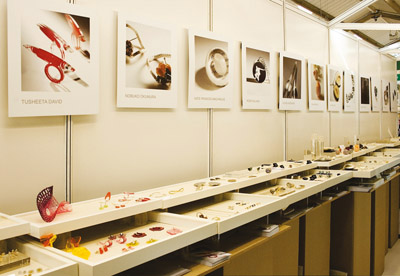 Sarah Kelly, a Birmingham based jewellery designer maker is celebrating success after scooping a top award by winning the  BJA Award for Excellence in Jewellery at the British Craft Trade Fair.

Sarah launched her design company Saloukee in 2008, to produce, market and distribute her unique range of jewellery, which is made in paper.

Her debut collection was unveiled at Harrogate and so it was a tremendous achievement to carry off this award at her very first exhibition.

Sarah is enrolled on the Design Space project and exhibited alongside fellow participants on the programme on a group stand, which received widespread acclaim at the British Craft & Trade Fair. 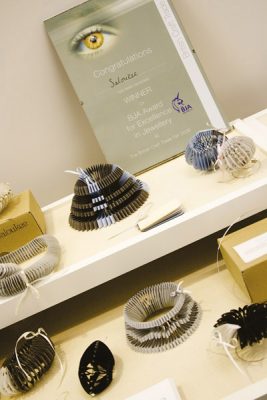 The programme is funded by Birmingham City Council and the workshop is based in the heart of Birmingham’s Jewellery Quarter. At the end of the 12 month placements, jewellers become self employed.

The programme has proved very popular and has been a catalyst for encouraging designer makers to remain in the Jewellery Quarter, long after they leave the programme.

Councillor Neville Summerfield, Birmingham City Council Cabinet Member for Regeneration, said: “In winning this award Sarah is carrying forward the proud tradition of the Quarter as the UK’s foremost centre for jewellery design and manufacturing.

That the Design Space can play in a role in promoting bright, young and talented designers such as Sarah is crucial in guaranteeing the on-going success and prosperity of the Quarter for many generations to come.”