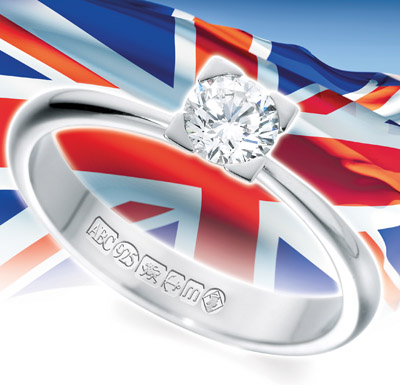 The United Kingdom Assay Offices have joined forces to launch a commemorative hallmark to celebrate HM The Queen’s Diamond Jubilee in 2012.

Known as the Diamond Jubilee Mark, this special commemorative mark, approved by the British Hallmarking Council, depicts a young Queen Elizabeth wearing an oversized crown in a diamond shaped surround.

This limited edition, optional mark will be available from all four UK Assay Offices (London, Birmingham, Sheffield and Edinburgh) in combination with a statutory hallmark from 1 July 2011 until 1 October 2012.

In the history of hallmarking there have only ever been three other commemorative marks: one to celebrate the Silver Jubilee of King George V in 1935: one to mark HM The Queen’s Silver Jubilee in 1977: and then in, 2000, a Millennium Mark.

The Diamond Jubilee Mark will be available for use on all precious metal articles: gold, silver, platinum and palladium and will be applied with the appropriate date letter ‘m’ until 31 December, 2011 and with ‘n’ throughout 2012.

The assaying and hallmarking of precious metal articles is one of the earliest forms of consumer protection and can be traced back to at least 1327. The word hallmark originates from the fifteenth century when London craftsmen were first required to bring their wares to Goldsmiths’ Hall for marking.

In the 21st century some 5 million precious metal items are hallmarked in London by the Goldsmiths’ Company Assay Office annually, each bearing its unique symbol the leopard’s head, the premier hallmark in the UK. Collectively the four UK Assay Offices currently hallmark some 15 million articles of precious metal each year.

Hallmarking has withstood the test of time and has proven itself to be a valuable means of consumer protection in an area of trade where the temptation to defraud the end customer is very real. With the price of precious metals at an all time high, the hallmark continues to be a vital form of consumer protection.

2012 will be a momentous year, with HM the Queen celebrating 60 glorious years on the throne and the Olympic Games being staged in London. This presents an exceptional commercial opportunity for the country’s jewellery and giftware industry and the Diamond Jubilee Mark is likely to contribute to the collectability of items in the future.