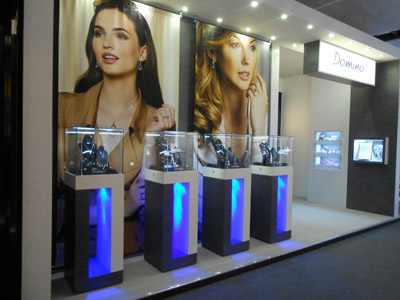 An eye-catching new stand in a more prominent position within Hall of Visions, certainly paid dividends for Domino at this year’s Baselworld.

The company’s new stand with its stunning life-style images and well-lit, purpose-built display cases made a strong statement and was extremely well received, providing a magnet for buyers from across Europe as well as from the Middle and Far East.

There was strong interest in designs from the company’s new Diamond Ring Mounts (DRM) collection particularly in platinum.

Available at Basel for a sneak peak preview, the collection will launch officially in June this year. Rosabella, Domino’s collection of stylish, contemporary diamond suites, was also popular; so too the ‘Sassolini’ range of variously coloured cabochon stone rings and pendants in rich yellow gold.

“This was an excellent show for us,” commented Domino’s sales and marketing director, Andrew Sollitt. “During the past year our European Sales Manager, Laurent Nicollier has made many useful contacts in his native France and in Northern Europe and we were delighted to welcome many of his retailers, as well as a number of our existing British customers to the stand.

“However one of the really great things about Basel is the variety of jewellers it attracts from all over the world and we enjoyed meeting potential new stockists from as far afield as Israel and Lebanon.

“There was genuine interest, frequently backed by firm orders, in our ranges of fashionable, British-designed, and British-made jewellery. There is no doubt that the Domino brand and its ‘Made in the UK’ label, are establishing a rapidly growing cache in the European market,” Sollitt concluded.