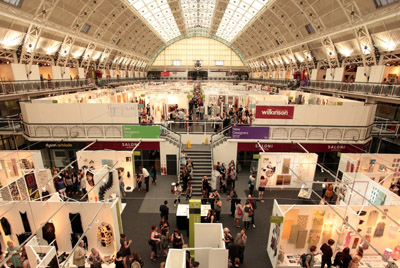 Weston Beamor, the Birmingham-based jewellery casting and rapid-prototyping company, has announced that it is to sponsor an award at this year’s New Designers’ exhibition.

The Award for ‘The most Innovative use of CAD in Jewellery Design’ will be made during Part 1 of the exhibition which takes place at the Business Design Centre in Islington from 26th – 29th June.

New Designers, which is supported by a number of big name brands such as John Lewis, Sanderson, Hallmark and Sky, showcases the work of over 3,000 of the most talented, newly graduated designers from the UK’s leading universities over two separate weeks.

It has eight distinct ‘design zones’ of which jewellery and metalwork is one. The winner of the Weston Beamor prize will receive a week of work experience with the company and £1000 in cash.

Weston Beamor has invited the well-known jewellery designer Alex Monroe, the contemporary jewellery retailer Helen Dimmick of Green & Benz, and Lindsey Straughton of The British Jewellers’ Association, who has considerable experience in mentoring young designers taking part in KickStart at International Jewellery London, to act as its judges in the competition. The Award will be made at a VIP event to be held at the exhibition on the evening of 26th June.

“Innovation in jewellery making is at the heart of Weston Beamor’s ethos and its practice and the company employs a great many talented jewellery and metalwork graduates in a range of different roles.

Our industry is only as good as the new talent coming into it and as a company we are keen to foster this in every way we can. We have based our award on computer aided design as this is now central to both large and small scale jewellery production and is a key skill for those looking to make their way in our industry,” says the company’s Head of Business Development, Glen Day.

In addition to its work with New Designers Weston Beamor also sponsors prizes for young designers at the annual Goldsmiths’ Craft Awards and with the Jewellery School at Birmingham City University. Each year the company also works closely with a couple of promising new designers, of its own choosing, to provide free support and in some cases free services and products, to help them find a foothold in the industry. The now well-known luxury pen designer Jack Row is a case in point.