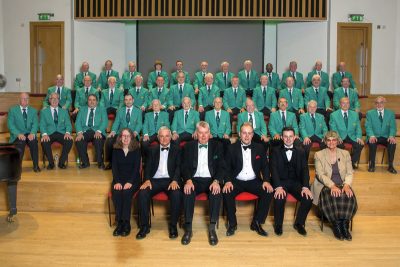 ‘Birmingham Icknield Male Voice Choir celebrated their 120th Anniversary, not at The Great Hall, Birmingham University as planned but as a virtual concert on Zoom. It was the best they could do under the circumstances, although we all missed having an audience to sing to. We look forward to those days returning with great anticipation.

The programme consisted of many of their favourite songs starting with ‘What Would I Do Without My Music’, followed by ‘African Prayer’ among others and finishing off with ‘Morte Criste’ with its rousing finish. You could almost hear the audience shouting for an encore!

We thanked members of Hadley and District MVC and Worcester MVC for joining us for this special occasion and Steve Roche, our MD for leading us all in song. Plus, a special mention to our Chairman, Alistair Campbell, who along with others, took part in a sponsored walk in Sutton Park, helping raise in excess of £3000.00 for Birmingham St. Mary’s Hospice, our chosen charity for this year’s EAMVC concert’.

(NOTE: the IMVC was featured in our ‘JQ History & Guide’ and performed regularly at St Paul’s Church when Canon Denis Claringbull was vicar).