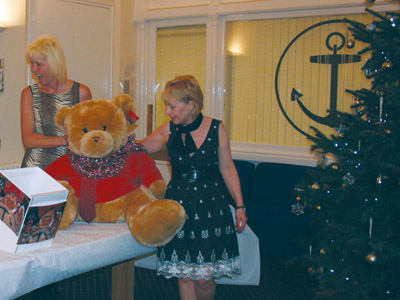 ‘Benjamin’ Bear will be missed by all the staff who have grown very fond of him. Top Ted has deputised for The Assay Master during his summer holidays, he has tried his hand not very successfully at learning the difficult skill of hand marking.

He then captained the Assay Office Football team and finally turned his talents to the art of jewellery, watch and silverware valuations as a trainee valuer with SafeGuard.

He has helped raise over £300 for the BJGFF Benevolent Society – a charity which supports disadvantaged people who worked in the jewellery and giftware industries and now find themselves in financial difficulty. Many thanks to everyone who participated and help to raise money for this worthwhile cause.

Diane Thomas of the British Jewellers Association won the runner up prize of a small ‘singing’ teddy bear.

Marissa Grice and Margaret Owen presided over the draw.