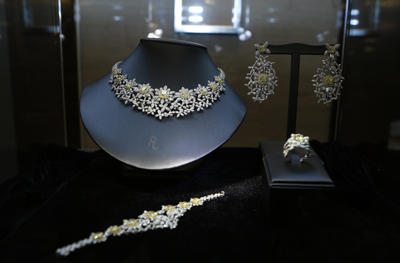 The celebration started with a speech from the host, Liu followed by speeches from Jing Jing, Gang Dong, Xiajun Meng and Ralph Rogers, who each reflected on the jewellery market, design and their forecast for the future of the industry.

Liu showcased thirty stunning bespoke pieces created in the last five years, twenty-three of which were loaned from their owners for the event. The showcase included the beautiful ‘Unicorn’ necklace, and the award-winning Green Tourmaline necklace, which was adored by actor Yu Jian Zhang and actress Madina Memet who attended the ceremony.

Fei Liu’s unique design can be recognized in different bespoke pieces: Yellow diamond set which consist of 40 carats of cushion cut fancy yellow diamonds, Gothic rubellite necklace and Lily of the Valley necklace and pendant inspired by the Lily flower.

The Unicorn necklace is made with 18 carat white gold. The face of the unicorn is intricately carved from white Russian jade, whilst the wavy hair is set with 2465 pave-set diamonds, which gives the piece a beautiful shimmer due to its three-dimensional kinetic movements.

To contrast the white jade the necklace itself is completed with black volcanic stones to give it that Eastern rock ‘n’ roll style. The piece that won the IJL Editor’s Choice Award, Green Feather Tourmaline necklace, was the event’s show-stopping piece. Handcrafted with 509ct of green tourmaline beads, 84g of 18k white gold, 17.7 carats of diamonds and 19.6 carats of garnets. The feather centrepiece can also be detached from the beaded necklace and worn by itself as a large dramatic brooch.

Every one of Fei’s designs is made from a three hundred and sixty degree angle. Any move of the body that shows a different angle of a piece reveals intricate framework just as interesting as the rest of the piece.

Fei’s newest pieces that were showcased are Oriental Beauty ring and Devotion necklace. Oriental Beauty ring is set in platinum with a 5ct Tsavorite centre stone surrounded by pave diamonds. The shoulders of the ring consist of an intricately hand-carved pearl and lapis lazulito.

In the past five years, Fei Liu together with his team focused on developing jewellery design which brought him a UK Jewellery Awards nomination for the brand of the year.

This year was celebrated as the 10th anniversary of Fei Liu Fine Jewellery brand in UK and China. For the first time bespoke pieces were showcased on the first event to celebrate the 10 years organized in London on 11th of June.