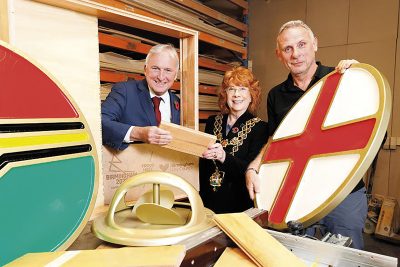 Representatives from the 72 nations and territories that appeared at the Birmingham Commonwealth Games are set to be presented with special gifts as a thank you for their participation.

During the Games, one of the most popular attractions in the city centre was Flag of Nations in Centenary Square – a display of the flags of all of the Commonwealth nations and territories, represented as oversized pin badges in recognition of the Games-time tradition which sees athletes and officials exchange pin badges with members of other teams.

The giant badges, commissioned by the city council, are being given to High Commissioners and other senior representatives of each competing nation and territory on behalf of the people of the Proud Host City of Birmingham.
They will be presented in special presentation boxes, approximately one metre square, made by Nechells-based Birmingham Case Makers Ltd from reclaimed wood used at Games venues or in the work to prepare the arenas for competition.

Cllr Ian Ward, Leader of Birmingham City Council, said: “The thousands of athletes and officials that came to Birmingham this summer were at the core of an unforgettable celebration of the city, its people, and its culture.
“The Commonwealth Games were a huge part of Birmingham’s Golden Decade of Opportunity – which is exactly why we, as the Proud Host City, want to thank all of the competing nations and territories for the huge part they played in what many say were the best Games ever.

The boxes are being deliberately left in a ‘raw state’ to show features such as taped court markings to highlight the origin of the materials.

And to ensure the local benefit of this project was as far-reaching as possible, other specialist suppliers have been involved, including the source of the wood screws for the new boxes – another Birmingham firm, Forward Fastener Manufacturing.

Shaun Adams, Managing Director at Birmingham Case Makers Ltd, added: “We have been in the city for more than 40 years, so it was very meaningful and incredibly special to be able to play a small part in that by supplying the boxes for these badges.

“I couldn’t be any prouder of our home city and our team here at Birmingham Case Makers.

“We’ve shown that we can supply the highest quality, bespoke, handmade presentation boxes for medals and awards – we are the untold story, the hidden maker. No-one knows about us, but we bring the added value that makes the badge the honour it is.”

Background notes
Birmingham Case Makers, in Great Lister Street, was once one of around 30 specialist case-making companies in the Jewellery Quarter, but many folded in the face of cheaper competition from overseas and the business is now among the last of its kind in the UK.