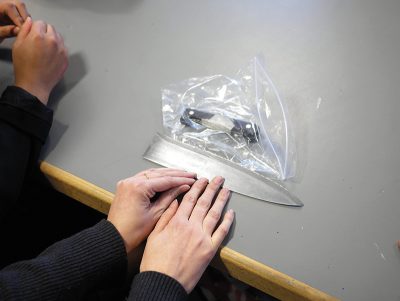 A leading artist, activist and academic is using jewellery as a vehicle for social intervention as he launches a special project aimed at tackling knife crime among young people in Birmingham.
The ‘Swords into Ploughshares: Knives into Jewels’ project had been co-developed by Dauvit Alexander, Senior Lecturer in Jewellery and Silversmithing at Birmingham City University’s (BCU) School of Jewellery and former head of School Professor Norman Cherry.

This collaborative project will take jewellery into schools in Areas of Multiple Deprivation (AMDs) bringing together drama, virtual reality, crafting, intensive mentoring, and first-aid training to encourage 14 to 16-year-olds to think differently about how to reduce knife crime in their communities.

“This project is not just talking about a problem – it’s about giving young people the tools and opportunities to think deeply about their communities and encourage them to make creative decisions and informed choices,” said Alexander.

“The pilot project we ran in 2018 noticeably enhanced the lives of participants by changing behaviours and improving their engagement at school. Difficult conversations became easier to have, thanks to the presence of community mentors.

“As part of the project, the students involved will visit the BCU School of Jewellery, opening their eyes to the wider city, the opportunities available and the potential of pursuing creative careers.”
The students taking part in the project will work with experienced staff from Round Midnight Theatre, Street Doctors, Ezekial King Mentoring and BCU, using participant-led craft practices to challenge thinking around ‘street life’, gang membership and knife crime.

The knives that will be used in the project have been removed from the street through the West Midlands Police Knife surrender bins. They will be cut down and used as the raw materials for jewellery pieces which pupils will design and create both in their schools and at Birmingham City University’s renowned School of Jewellery.

Alexander and Cherry will co-curate, the project’s final exhibition ‘Knives into Jewels’ which will feature 35 international jewellery and metal artists’ work alongside the work of students who have refashioned, repurposed, adapted and otherwise transformed the knives surrendered by UK Police.

The success of the pilot project, held in Parry Barry at Broadway Academy in 2018, along with the support of the BCU School of Jewellery and other local stakeholders inspired Alexander and Cherry to begin funding for the project’s return in 2022/23.

Initial funding is underway with the pair aiming to gather donations from local and wider communities as they pledge their commitment to positively impacting the lives of Birmingham’s young people.