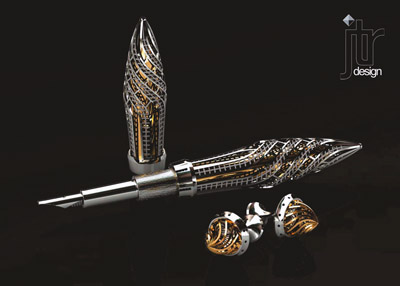 Intended for the most discerning of corporate clientele and collectors, the bespoke writing instrument has been crafted in Palladium; gold plated sterling silver and is set with fifty, brilliant cut black diamonds.

The piece is also accompanied by a pair of matching cufflinks constructed in a combination of palladium and 9ct gold, which are also diamond set.

Entitled ‘Architect’, the design’s intricate geometric spirals and twists draw inspiration from a mixture of 20th century and contemporary architecture. Most notably, Gaudi’s ‘Sagrada Familia’ in Barcelona and Lord Foster’s ’30 St Marys Axe’ of Canary Wharf, otherwise known as the ‘Gherkin’, which dominates the London skyline.

Jack commented: “I wanted to create a superbly luxurious product that was as much a work of art or small sculpture as a functional writing instrument. The design should appeal to discerning, design conscious individuals who desire the ultimate in an exclusive writing instrument.”

The set was produced with a combination of computer-aided-design, rapid prototyping, cutting edge laser welding technology and traditional Goldsmithing skills. It has caught the attention of several Jewellery Quarter based businesses.

“This young designer’s spectacular product expertly highlights the technological skills we believe our evolving industry needs to compete with manufacturing competition from the Far-East and survive the current, economic slow-down.” The company employs over one-hundred people in its West Midlands based factory.

The Birmingham Assay Office was very interested by Jack’s creative utilisation of Palladium with gold plated sterling silver. They used their expertise and ability to carefully laser etch the pen with his registered sponsor mark and hallmark on the sterling silver part of the piece.

Jack completes his course at Birmingham City University in June as one of the first graduates of the new BA (Hons) Jewellery and Silversmithing – Design for Industry programme. Course lecturer and award winning designer, Claire Price, said “

The course provides a unique opportunity to understand the role and significance of a designer within the jewellery and silversmithing industry. Whilst there is clear emphasis on new technology, the course builds on existing traditional skills to enhance manufacturing potential.”

Jack’s pen and cufflinks will initially be exhibited, along with other graduates’ work, at the School of Jewellery in Birmingham’s historic Jewellery Quarter from the 13th to the 22nd June 2009.

About the Designer:
Jack is a twenty-three year old designer and CAD developer, originally from Nottingham, where he trained and worked as a Goldsmith. He has worked for several Birmingham manufacturers in design and product development roles. He is a commercially conscious designer, with designs the catalogue of long-established, manufacturing jewellers (Charles Green and Sons).

He has also recently exhibited his silverware with the Worshipful Company of Goldsmiths. His design work is chiefly influenced by geometric form and the utilisation of new technologies in partnership with traditional craft skills. He graduates from Birmingham City University this June with a BA (Hons) in Jewellery and Silversmithing – Design for Industry.