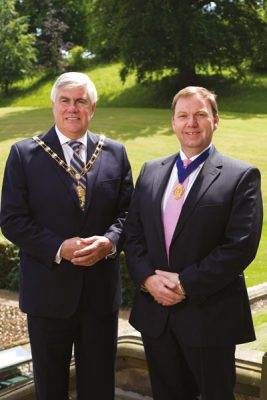 The proverbial glass was quite definitely half full, rather than half empty, at the British Jewellery Giftware and Finishing Federation’s Annual General Meeting held at the Menzies Welcombe Hotel in Stratford-Upon-Avon on 4th June, 2009.

The tone was set by the outgoing President of the Federation, the Birmingham jewellery distributor David Doyle, who opened the meeting with a positive review of the organisation’s performance during the past year.

Whilst acknowledging the challenges posed to the Federation and the five trade associations within in it by the current economic climate, Mr Doyle said that he and his fellow directors had put in place a five year plan to instigate a number of measures to strengthen and improve the support functions and services the Federation provides to its members, whilst also safeguarding its strong capital basis.

Mr Doyle said that a key objective for the Board during 2008 had been to encourage further trade associations to join the Federation and thus increase its buying and lobbying power. He reiterated his pleasure in welcoming BHETA (the British Home Enhancement Trade Association) within the fold.

“We now have 2,800 member firms, employing some 69,000 staff and with a combined turnover of £29 billion, which makes us a real force to be reckoned with,” he said.

Mr Doyle’s up-beat message was echoed in short presentations by officers of the key trade associations within the Federation, all of which have maintained their membership levels and had positive initiatives to report upon.

Changes to the Board
The meeting saw a number of changes to the Federation’s Board of directors with David Metcalfe, retired chairman of the exhibition company Trade Promotion Services, taking over the presidential role from David Doyle. David Metcalfe, said he saw his appointment as “a great privilege” and praised David Doyle for the “energy, intellect and entrepreneurial skill” he had brought to his presidency.

“The year ahead will be challenging and exciting. Our members are facing difficult times and it is our task to develop new strategies to help them shape and develop their businesses,” he said.

Steven Jones of the luggage company, Capricorn Europe was elected Vice President of the Board in the place of Linda Evans, who has now retired.

Two new directors – Mr Mark Olsen of the metal finishing company, Ashton Moore and Mr Michael Hughes of the Birmingham precious metal casting company, Jewelcraft – were elected to the Board together with the current president of BHETA Mr Andrew Weiss, of Isaac Lord,  who was co-opted earlier in the year. Mr Sangat Chandhok of Newcom Distributors was reappointed as a director for the period 2009/11.

Guest speaker
Bankers have not been the business community’s most favourite profession over recent months, however the investment banker Darryl Eales, Chief Executive of LDC, the direct private equity investment business of the Lloyds Banking Group, who was the guest speaker at the meeting, received a warm reception from the Federation audience.

In an informative, wide-ranging and often amusing speech, which he was keen to stress expressed his personal views rather than those of his bank, Mr Eales spoke about his business philosophy and his work at LDC whilst also addressing the reasons for the credit crunch and the financial outlook.

He said: “All of us here have benefitted from the speculative boom and from cheap money. What happened with the credit crunch was complex and had multiple causes. The banks, the government, borrowers and consumers were all willing participants. We all knew that houses prices couldn’t last. They say ‘If it’s too good to be true it probably is too good to be true’. It’s easy to criticise others but we should all employ our own intelligence.”

Having just returned from a trip to China and Hong Kong, Eales said he was struck by those countries’ positive attitude in comparison to the negativity that is prevalent in the UK. “Britain is great. We mustn’t talk ourselves down and we must rise to the challenge at all times,” he concluded.