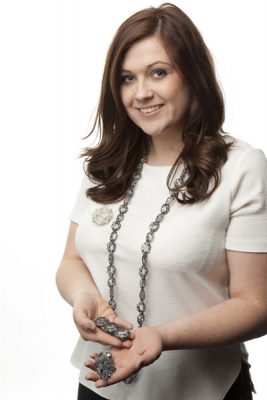 Lindsay Hill, a Jewellery and Silversmithing graduate from Glasgow School of Art has won the Weston Beamor Award at this year’s New Designers exhibition which opened at the Business Design Centre in London on 25th June 2014.

The Award which is for ‘outstanding pieces incorporating the innovative use of CAD, 3D printing and casting alongside traditional finishing techniques’ comes with prize of £1000 and a one week work placement within Weston Beamor.

Lindsay’s ‘Imperfections’ collection of bold, oxidised silver jewellery which is based on the positive and negative spaces in gemstone structures and more specifically the flaws within diamonds, really appealed to the judges.

“It was a very exciting day and choosing a winner was pretty overwhelming as there was so much jewellery to choose from of vastly different quality and imagination.

Lindsay had done a great deal of experimentation and we felt she was really enthusiastic and knowledgeable about the whole jewellery making processes. Of all the people on the shortlist we felt she would benefit most from the limelight,” commented Stephen Einhorn. 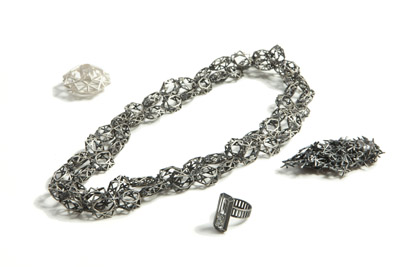 Vicky Leyshon also felt that Lindsay would benefit hugely from winning and especially from spending time at Weston Beamor. “She had worked so hard at bringing her concept to reality and was so keen to embellish it further. I know that the time she spends with the team at Weston Beamor will help her to move her work on even further,” she said.

Max Shepherd agrees: “I was very impressed by what I saw and it was interesting to see how many of the students, like Lindsay, were employing hand-making and craft-based skills alongside more modern computer aided techniques.

Lindsay’s work is very bold and very graphic and uses 3D printing to create jewellery that would be very difficult to make by hand. We felt she has real passion and would benefit from having access to the commercial environment that a week at Weston Beamor can provide,” he said.

Speaking about her win, Lindsay Hill said, “It is unbelievable to have won – everyone’s work showed so much talent; to be picked out is fantastic. I think it might sink-in in three days time, I am on cloud nine.”

Commenting for Weston Beamor, Ed Hole said: “Weston Beamor was delighted to be able to sponsor this Award at New Designers for the second time and we shall much look forward to welcoming Lindsay to Birmingham a little later in the year and to showing her the ins and out of commercial jewellery production. We feel sure she has a great future in our industry and sincerely hope that winning our prize will speed her on her way to successful career.”