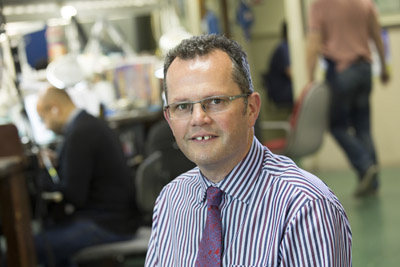 Domino, one of the UK’s leading precious jewellery producers, has announced the appointment of Mark Thomas as its Operations Director.

Prior to joining Domino, Mark worked at Emma Bridgewater, the Stoke-on-Trent, design-led, ceramics company where he was Head of Manufacturing, a post that was the culmination of a 28-year career in and around the Potteries during which he held a number of production roles in big-name ceramic firms.

“Discovering the ins and outs of jewellery production is going to be a massive learning curve but after just a couple of weeks in the job I can already see very many similarities with ceramics in terms of the processes used, the dexterity of the craftspeople and the mixture of cutting edge and traditional skills,” Mark commented.

Having worked at Emma Bridgewater, who brought manufacturing jobs back to the potteries from overseas; Mark is a huge proponent of ‘British Made’. “I am hugely excited to be involved in business that is investing heavily in the production of jewellery in the heart of Birmingham’s Jewellery Quarter which has such a rich heritage. I also much respect the ethos of the company and its commitment to training and developing its workforce,” he said.

One of Mark’s first tasks at Domino will be to introduce Cellular Manufacturing into the brand’s production processes. This is a method of working which will create stand-alone units within the plant focussed on producing particular products rather than operating what he describes as the current ‘more scattergun approach.”

“In some ways not knowing how things are done in the jewellery industry is a great bonus and as my team is already discovering, doing something in particular way, simply because that is the way it has always been done, isn’t necessarily the most effective way of doing it. It is going to be an extremely challenging process but one which I know is also going to be exciting and worthwhile,” he concluded.

Andrew Morton, managing director of WB is delighted to have Mark on board. “I have no doubt that Mark’s wide expertise in manufacturing optimisation, strategic planning and operational turnaround will further enhance Domino’s performance bringing us to the next level in terms of in-house manufacturing particularly in our wedding ring and bridal collections,” he commented.