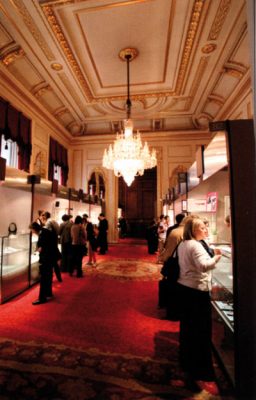 British coins of the realm will be counted, examined and assayed in the ancient Trial of the Pyx. The Trial (Pyx is Latin for chest) dates back to the 13th century and has been reaffirmed by an Act of Parliament (Coinage Act 1971) to conduct an examination by jury to ascertain that the coins produced by the Royal Mint are of the correct weight, size and composition.

The Trial is presided over by the Queen’s Remembrancer, the senior Judge at the Royal Courts of Justice, who wears full court dress complete with tricorn hat.

Silver with a Pinch of Salt
A tantalising taste of modern and historic silver for salt (With support from Maldon Salt).

This fascinating exhibition looks at the role of silver in the context of the history of salt as a condiment and its place on the dining table. It includes important historical silver salt cellars (more commonly referred to simply as salts) alongside a large selection of varied work by contemporary designers and vividly illustrates the different roles and guises silver salts have taken over the ages.

The silver salts on exhibition have been generously loaned by private collectors and institutions, including Her Majesty the Queen, the Salters’ Company, as well as from the Goldsmiths’ Company’s own collection and from contemporary silversmiths. A total number of 180 salts are on display.

Creation II. – An insight into the mind of the Modern Artist-Jeweller through jewellery and film.
May 29 to July 1, 2009. Monday to Saturday l0am to 5pm. At Goldsmiths’ Hall, London EC2. Admission Free.

Following on from Creation I held in 2004 which concentrated on silversmiths, the exhibition Creation II will explore and question the concept of creativity by focusing on a group of leading contemporary designer-jewellers and their work.

The exhibition explores the multi-faceted process of creativity by showing a selection of pieces by each jeweller – some of the works have been specially made for the exhibition while others show the development of their talents and individual styles. The result is diverse and startling.

Aside from the stunning pieces of jewellery on display, another important and exciting element of the exhibition is the series of short documentary films on each of the exhibitors, which play throughout vividly illustrating the creation process. The films, which were commissioned by the Goldsmiths’ Company as part of its educational remit, were made by students from Goldsmiths’ College, University of London, Newport International Film School, the University of Wales and Edinburgh College of Art. The students were selected by the renowned documentary filmmaker and winner of the BAFTA Life-Time Achievement Award 2008, Paul Watson, who directed the project in liaison with their tutors.

These documentaries transport the visitor into the minds and souls of the artist jewellers and present visual evidence of how each of their creativity is subsequently translated through skilled craftsmanship into intriguing and stylish jewels.

Goldsmiths’ Fair is the largest and most inspirational selling event of its kind in Europe. Showcasing the very best of British design and craftsmanship, 27 years on, the Fair continues to attract an ever increasing number of visitors and collectors from around the world. With its irresistible array of fabulous designer jewellery and stunning, innovative silverware, it is a must for anyone who appreciates individuality and superlative design.

Much of the Fair’s success and its on-going appeal are due to the fact that it accommodates every personal taste, style and budget (pieces start from £60). The choice of treasures on offer is overwhelming – from cutting-edge and flamboyant to classic and restrained – it is virtually impossible not to be tempted!

The 160 designer-makers who exhibit at the Fair represent the cream of British talent, both established and emerging – ten recent graduates are given free stands by the Goldsmiths’ Company to help launch their careers. Between them they produce a stunningly varied and vital portfolio of work utilising traditional skills as well as the latest modern technologies. Consequently visitors can get a complete overview of what is au courant in terms of styles and trends in the world of contemporary jewellery and silver.

Above all, aside from all the treasures, what makes the Fair particularly appealing is that it provides the rare opportunity to meet the designer-makers themselves and to learn more about their work, their passion and dedication to their craft. Buying something directly from the maker adds a very important human element and commissioning something unique becomes even more inclusive and special.