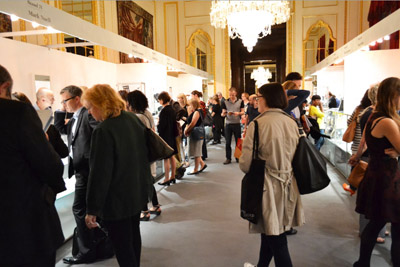 The Goldsmiths’ Company, organisers of Goldsmiths’ Fair, have achieved encouraging results after making ambitious changes to this year’s prestigious selling event.
Between 22 September and 5 October, Goldsmiths’ Fair attracted just over 9,700 visitors, up 9% on last year.

The Fair’s 170 exhibitors sold more than a million pounds worth of contemporary jewellery and silver from their latest collections and are reporting a great deal of follow-up business and expected commissions as a direct result of the event.

Cementing its global reputation, the Fair attracted buyers from across the UK, Europe, the US, China and Russia.

David Mills, Head of Marketing & Communications at the Goldsmiths’ Company, commented: “‘it is hugely satisfying to see that the ambitious changes we made this year resulted in increased footfall and such impressive sales figures.

The new layout, fresh look, and special events all played their part, but we also have to thank our exhibitors who rose to the challenge and created such inspiring new work. This was always at the heart of our strategy. As organisers, we won’t rest on our laurels – we’ll be back next year with improvements, more initiatives, and exciting new collections.’

The introduction of Thursday evening late opening and a 2-for-1 ticket offer for those with an EC postcode contributed to the uplift in visitor figures and attracted new audiences to the event.

The Fair’s first stand-alone website and social media campaign also made a major contribution – a remarkable 23,000 individual users have visited http://www.goldsmithsfair.co.uk since it went live on 5 March 2014.