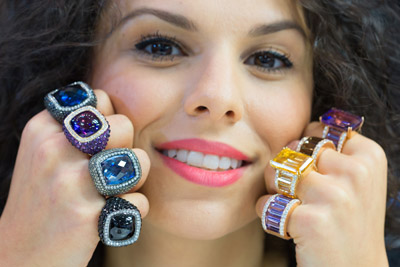 On their 30th Anniversary, Intergem managed to register an increase of 10 percent in the number of visitors. The 30th event of this special fair trade for gemstones, precious stone objects, pearls, jewellery, and special technological products has managed to maintain its Pole Position.

30 years of uniqueness! This key note characterized this year’s Intergem, once again presenting the industry from Idar-Oberstein in its best colours. A total amount of 3,500 visitors, 300 more than the year before, came to the gemstone capitol to see the range of the 130 exhibitors.

“Concerning the general situation, this year’s Intergem was very successful,” says the Managing Director of Intergem Messe GmbH Kai-Uwe Hille and continues: “Taking into consideration that this autumn a lot of fair trades had to report a decrease or even had to close down, we can be more than satisfied with the outcome of our event.”

There was a record attendance at the first day, especially having German Unification Day for the opening turned out to be the perfect scheduling: About 1150 purchasers came to visit the fairground halls. This record result caused an enthusiastic feeling among the exhibitors. “Already at the first day of the fair we were able to achieve the overall result of last year’s whole Intergem,” reported Frank Heringer from the Diamond Group.

Wolfram Faust from Emil Weis Opale agreed and declared: “On Friday the halls were all filled with people and we were able to do good business.” Unfortunately, the stream of visitors bottomed out during the remaining fair trade days. Nevertheless, the total amount of visitors achieved a positive growth amount. 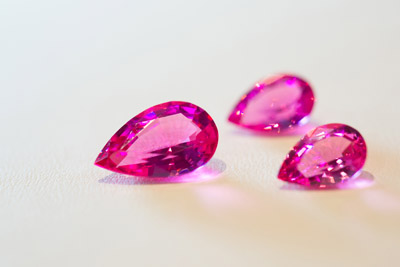 On Saturday morning the anniversary celebration was held in a completely filled foyer with 300 guests of honour including Malu Dreyer, Prime Minister of Rhineland-Palatinate. In her speech she emphasized: “Intergem is a very special flagship for the Region and Rhineland-Palatinate as a whole. The trade fair, as well as the industry display unique characteristics that give them a worldwide unique position.”

Furthermore, she encouraged to maintain this exceptional position, especially since it also influences peoples’ identities in the region. Thirty years ago, it required a courageous step to launch Intergem which now again needs some courage to advance and develop further.

Jochen Müller, President of the Diamond and Gemstone Bourse Idar-Oberstein pointed out in his address: “Intergem is a brilliant PR event for Idar-Oberstein and the industry with a much greater significance than many people may think. Let us take the anniversary as an impulse for future thinking.” He challenged particularly the younger generation, the current business leaders, to actively develop and advance the future Intergem events. Bruno Zimmer, Lord Mayor of Idar-Oberstein joined in:

“The flagship of the branch never ran by itself. Nevertheless, visitors from all over the world treasure Intergem as an exclusive showcase window.” Moreover, the sold-out and very successful tradeshow party on Saturday night at the Mercedes car dealership, showed the appreciation and degree of identification of the inhabitants of Idar-Oberstein for Intergem and its anniversary.

A highlight in this year’s framework programme was the diamond symposium including a panel discussion on Sunday morning. A range of trade fair visitors came to listen to the experts who were explaining the current development of prices, the business competition with web offers, the tense situation with rough stones, the laboratory specific ways of grading stones and the detection of syntheses.

Additionally, the trade visitors were given the opportunity to follow the live presentation of diamond grading by Christine Roeder-Heiderich from the Diamond Testing Laboratory and Dr. Ulrich Henn from the German Gemmological Society. Moreover, Dr. Ulrika D’Haenens-Johannsson from the research department of GIA presented a Diamond Detect Tool for the detection of syntheses, an equipment the German Diamond and Gemstone Bourse was exclusively provided with, which underlines once again the international significance of Intergem.

Also the audience was characterised by its internationality: “We had more customers and purchasers from foreign countries. Some even came from the USA and from Dubai,” reported Dr. Konrad Henn, chairman of the foundation from the trade fair society of Intergem Messe GmbH. Wolfram Faust from Emil Weis agreed: “We were overwhelmed by those people going on such long journeys to visit us.” 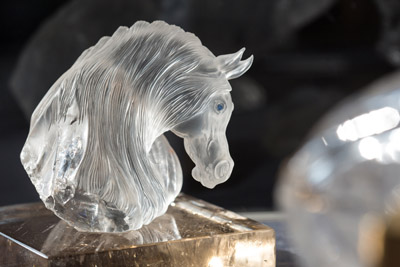 Also Heike Faller from Karl Faller was happy about the international customers: “We had visitors from America, Great Britain, China, Portugal, and Spain at our booth.” Christian Klein from Ph. Hahn Söhne confirmed: “It is obvious that the range of Intergem is interesting.” And, people not only came to have a look but also to buy. Heike Faller:

“We were able to record a higher demand for fine individual stones.” Nicole Ripp from Groh+Ripp said: “For us this year’s event was highly profitable. The interest in natural-coloured, high-quality, exceptional coloured stones is higher than ever.” Also Achim Grimm from Hermann Grimm was content: “All in all the results were satisfactory.”

The flagship of the branch does not have to worry about its future. Most of the exhibitors adhere to the concept. “This showcase needs to be retained at any rate,” Bernd Willi Ripp from Groh+Ripp pleaded. Achim Grimm agreed:

“This event is a unique image medium for the region and at the same time its best advertisement. It is a place to present yourself and your achievements and to get into contact with customers that also provide you with information about the current situation.”

Dieter Hahn clarified: “There is no alternative.” The fair management endeavours to equate the normal fluctuation with new exhibitors from exterior regions that offer an adequate and valuable range.

Intergem 2015 will take place from October 2nd to 5th.