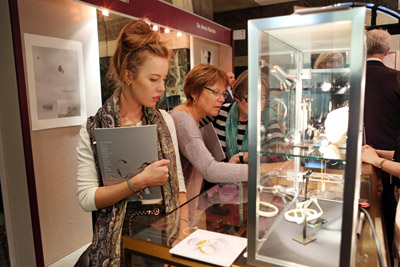 The superlative talents, skills, and creativity of British goldsmiths and silversmiths were on full display at the recent Goldsmiths’ Fair in London.

The 31st annual Fair proved that despite our “brand” dominated world, there is a constant and ever growing population who appreciate the original and prefer to buy something that is individual, personal and even unique.

Attendance was roughly on a par with last year and buying remains confident and informed. Once again the overall take of the Fair is well into impressive seven figures while the subsequent follow on trade and commissions placed during the year remains incalculable vital proof of the importance of the Fair to not only the exhibitors but the resulting cascade effect to their out-workers.

As silversmith Rebecca Joselyn says: “It’s not just about the sales I make at the event (which are a huge help) but it’s the contacts I make during the week and the follow up business that continues for months, even years afterwards, which are absolutely key to my continued success.” 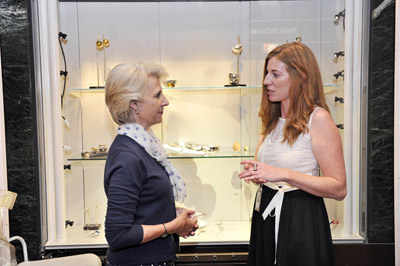 HRH The Duchess of Gloucester with Rebecca Hill

It’s also interesting to note that consumers are sophisticated, well-informed, and demanding – particularly when it comes to quality both in terms of craftsmanship and design.

Buyers come from all over the world – Japan, Mexico, the US, Europe, Australia and although the Fair is very much a consumer event, it also attracts trade buyers – jeweller Sarah Parker-Eaton took orders from a gallery in Paris, James Newman and Louise O’Neill both sold to galleries in the US, Dagmar Korecki from Copenhagen, to name but a few.

Recent graduate jeweller Victoria Walker, who received one of the 10 Goldsmiths’ Company graduate bursaries at the Fair said: “One of the many benefits of exhibiting at such a prestigious event is that it attracts visitors from all over the world, and at least four of my orders were for customers who live overseas.

Making good contacts is also another big part of doing the fair. During the week, I was approached by journalists, bloggers, suppliers, galleries, and even a large high street store enquired about stocking my work.” 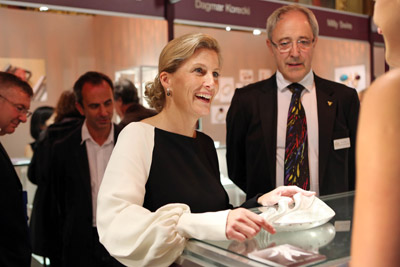 HRH The Countess of Wessex with Paul Dyson

The Fair continues to be an excellent hunting ground for engagement rings and many couples were observed on such romantic missions. Indeed a marriage proposal took place in front of William Cheshire’s stand – to everyone’s relief it was accepted to a round of applause!

Royal visits to Goldsmiths’ Fair are quite usual and this year the Fair was honoured by two Royal Visits. In Week One TRH The Duke and Duchess of Gloucester, both frequent past visitors enjoyed meeting and chatting to exhibitors and in Week Two HRH The Countess of Wessex made her first ever visit to Goldsmiths’ Hall and was clearly impressed with the quality and variety of the work that she saw.

Silversmith Rebecca Hill was chosen for the ‘Best New Design Award, Week One 2013’ and was presented to HRH The Duchess of Gloucester who described Rebecca’s work as “elegant, original and fun.” Jewellery duo Shimell and Madden took the Week Two ‘Best New Design Award’ for their debut fine collection ‘Symmetry’ which combines richly textured 18 carat gold with prismatic coloured gemstones. 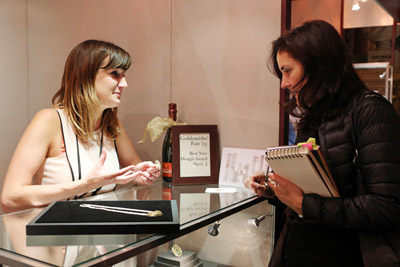 Rosemary Ransome Wallis, Curator of the Goldsmiths’ Company Collections, was also impressed: “It was so encouraging to see such vibrant creative vitality in the craftsmen’s work on show in this year’s Fair.

This innovation combined with quality craftsmanship meant that the Company bought four pieces of silver all deemed to be worthy of joining the most prestigious collection of contemporary silver in the world.”

Goldsmiths’ Fair remains one of the most important events in the Goldsmiths’ Company’s calendar and the Company is totally committed to ensuring that this ever-popular event goes from strength to strength.

As Paul Dyson, Director of Promotions, steps down, next year’s Goldsmiths’ Fair 2014 will come under the responsibility of David Mills, the newly appointed Head of Communications and Marketing, together with the support of Joanne Dodd. They will be advised and guided by key industry personnel on the new Communications Committee to ensure the selection standards do not slip.

Paul Dyson said, “It has been a huge honour to work with, promote, and develop the businesses of so many craftsmen. Far from retiring I will be developing other support for all these terribly talented jewellers and silversmiths.

My cufflink collection, which was not small to start with, has been hugely enhanced by the fine examples that I have purchased at each Fair during my 12 years with the Goldsmiths’ Company. This year I bought a pair of Mokume Gane links from Craig Stuart.”

David Mills said, “Looking ahead we are pleased to re-affirm our commitment to the Goldsmiths’ Fair and to maintaining its position as the premier fine jewellery and contemporary silver selling exhibition in the UK. This is the beginning of a new chapter for Goldsmiths’ Fair. Expect an exciting evolution that will build on the signature quality and elegance of the Fair while pushing forward toward a more global audience of luxury collectors.”