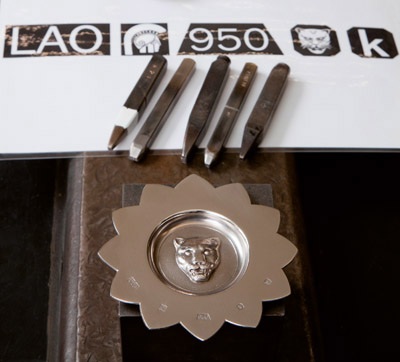 The UK H allmarking Act has now been amended by Parliament to incorporate palladium as a metal which requires hallmarking.

Having finally received official recognition as a precious metal in its own right, compulsory hallmarking of palladium items weighing 1g or over will come into effect as of January 1, 2010.

The first item of palladium to be hallmarked by the Goldsmiths’ Company Assay Office London with the new palladium hallmark is a dish made by London based platinumsmith Tom John (Tom John works mainly in platinum).

The dish which measures 100mm in diameter bears a striking chased and raised leopard’s head in its centre, the leopard’s head being the country’s oldest hallmark and the symbol of the Assay Office London.

Dr Robert Organ, Deputy Warden of the Goldsmiths’ Company Assay Office London said: “We are delighted to have officially hallmarked the first item of palladium in London with its new mark and Tom John’s attractive dish will be added to the Company’s collection to be preserved for posterity.” 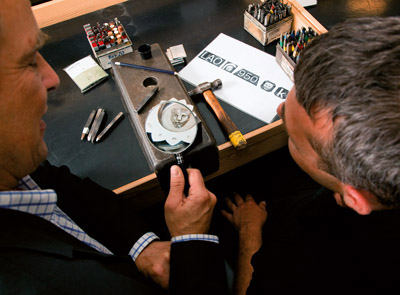 Tom John was present to witness the hallmarking of his dish. “It was a proud moment and I feel extremely honoured that my dish was the first to be hallmarked in the Assay Office London with the new palladium hallmark.”

Described by bullion dealers Johnson Matthey as a “credit crunch beating metal”, palladium is not only competitively priced but has many advantages for the jewellery trade.

Palladium is a naturally white lustrous and tarnish resistant metal that offers a good alternative to low carat white alloys. In addition, being malleable and easily manipulated, it is particularly suited to the process of setting gemstones, machine forming and hand-making which makes it an ideal metal for designer-makers who focus on the bespoke market.

Using palladium they can make larger more flamboyant pieces as palladium is much lighter than other platinum group metals. 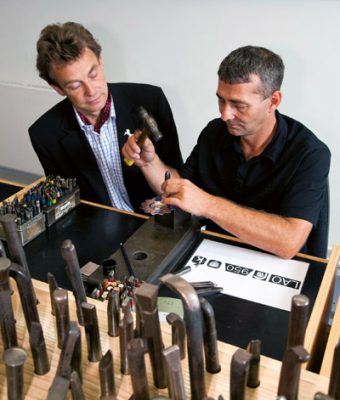 Palladium has been used in the jewellery industry since 1939, although mainly as an alloy, notably to ‘whiten’ gold’s natural yellow colour closer to that of platinum. It was only in recent years with the steep rise in price of gold and platinum that Chinese jewellers began producing significant volumes of palladium jewellery.

The interest has since spread westwards with a huge number of European and UK jewellers starting to appreciate the advantages of this ‘new’ metal with its exciting potential for the jewellery industry.