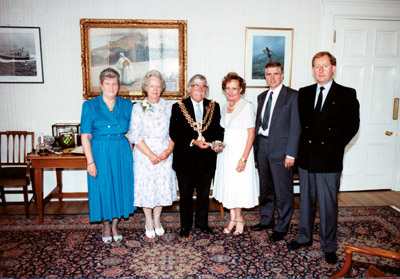 In July 1989 the Jewellery Quarter was a very different place to what it is today! On the positive side there were thousands of workers – (skilled and semi-skilled) employed in the Quarter and of course the School of Jewellery, the British Jewellery Association, and the Birmingham Assay Office were all highly active but …

On the downside – the streets were knee-deep in rubbish, the street lighting was almost non-existent, the pavements and roads were in an appalling condition, the bus service was erratic and unreliable and many buildings were tumbling down or completely derelict!

Parking was simply a case of ‘stick your car where you can’ which often led to blocked streets and complete chaos!

In 1989 the City Engineers and police asked the community for ideas on how the parking situation might be improved and it was at a ‘pre-JQA’ meeting convened by Marie Haddleton that she was challenged as to ‘who elected her to speak on behalf of the area’ which led to the formation of the JQA.

After three years of consultation on parking, 1992 saw drastic changes with pay & display parking being introduced. The JQA were heavily involved in these changes and one consideration we insisted upon was that more off-street car parking must be provided. 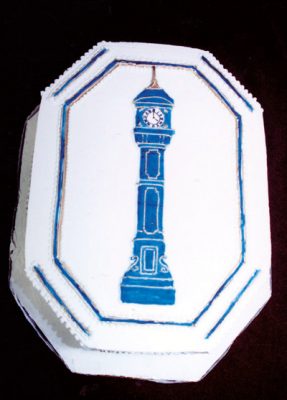 At a meeting held at York House in 1989 it was agreed that it was essential for the Jewellery Quarter to have an official association to represent the whole community and several people who had shown a keen interest were duly elected as directors.

The BJA and their solicitors helped in setting up the Association and The Jewellery Quarter Association was formally constituted into a limited company in July 1989.

To mark the occasion an Official Launch was held in the Lord Mayor’s Parlour and a two-day Exhibition of the variety of products and services existing in the Quarter was set up in Peel Place in Carver Street.

A beautiful cake, baked and iced by the staff of Key Jewellery was made to commemorate the official launch and was cut by the Lord Mayor of Birmingham.

The pictures created in icing on the cake represented scenes from around the Quarter and included a centrepiece showing the Chamberlain Clock.

Silver bowls donated by A Edward Jones and engraved with The Jewellery Quarter Association’s logo were presented to Councillor Albert Bore, the City Architect and to the Lord Mayor. 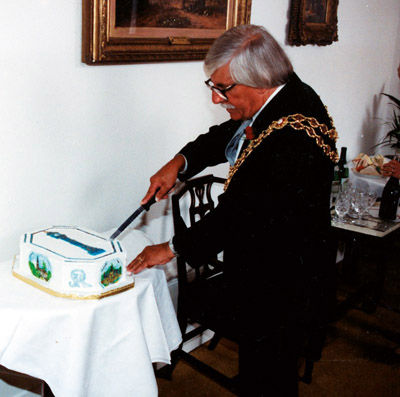 The JQA was ‘intended to be a neighbourhood organisation providing support and encouragement to all trades and professions in the area.

However, it is the general environment and an endeavour to preserve the Jewellery Quarter in a close-knit community that is one of its most important endeavours.’

When a lot of the ‘jobbing’ jewellers got fed up with being kept traditionally ‘poor’, relying on visiting ‘factors’ for their work which they sold to the lowest bidder – some revolted and split their workshops in half with one side open to the public and their workshop on the other side of the partition – a bit of carpet on the floor, a table with chains etc. hanging on nails was the ‘shop’.

Prior to this the public never dared to ask to buy ‘something through the trade’ or to look for repairs other than in a High Street shop. It was simply not done!

It was somewhat of a ‘boom’ time for jewellery, with ingots (and chains to hang them on) and heavy identity bracelets being much in fashion.

What it did mean though, was the public were beginning to ‘find’ the Quarter and an interest was being created in the history of the area so improvements were urgently necessary.

The pavements were re-laid (until Cable dug ‘em up again!) new street lights appeared and an improved bus service introduced – all with the JQA heavily involved – we pushed to have the Quarter properly signposted, also assisting with setting up the Jewellery Museum and refurbishment of the Chamberlain Clock.

We also worked closely with Jewellery Quarter Action in running the first ever Festivals. A list of Aims and Objectives were drawn up and in the past 20 years the JQA has strayed very little from these ideals.