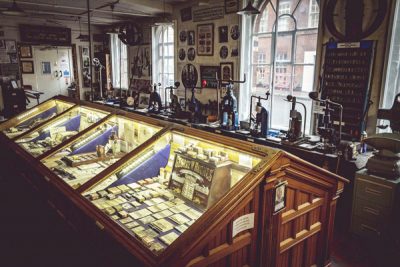 The Pen Museum is the world’s only museum dedicated to honouring and celebrating the important legacy of Birmingham’s 19th Century steel pen trade, which, at its height, employed an estimated 8,000 workers, of which 70% were women.

The mass production of affordable pens helped improve literacy worldwide and wherever a pen was used it most likely had been manufactured in Birmingham.

The unique and extensive collection of pens, nibs, machinery and exquisite artefacts they recount the history of one of Birmingham’s most famous industries and narrate the lives of entrepreneurs, manufacturers and workers whose expertise placed Birmingham at the centre of this worldwide trade.

Being an independent museum of charitable status most of the regular income is from visitors.

However, Government advice in response to the Coronavirus (COVID-19) crisis, it was necessary to close until further notice and to take the difficult decision to cancel all events until August.

The Pen Museum still has to meet bills and other overheads even though they are closed and need your help to save a unique glimpse of Birmingham’s industrial history.

A crowdfunding appeal was launched recently and the initial target of £1,500 being reached, being a great help in meeting overheads
A new stretch target of £3,500 was launched and already £2,869 has been pledged. The Pen Museum adds “Thanks to ongoing generosity hopefully its onwards and upwards as we fight to preserve the heritage of Birmingham’s famous pen trade and its vital role in spreading literacy worldwide.”

From the Pen Museum: Thank You!

We are deeply grateful for the kind generosity of the 300+ supporters who have helped to surpass our £3500 target with 12 days still to go before our campaign closes. Thank you all for your wonderful support and uplifting comments.