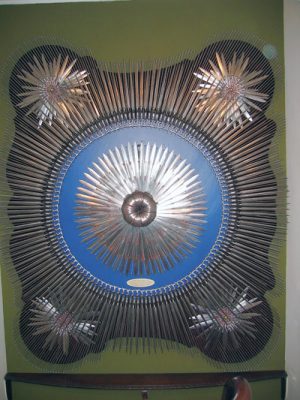 The nine Nadfas volunteers have completed the restoration of the Trophy, which has been re-assembled and hung in its original position, on the main staircase of the Proof House in Digbeth.

It was supervised by Simon Cane, Head of Collection Care at the Birmingham Museum and Art Gallery, together with Bill Harding, the Founder, and Curator of the Proof House Museum.

The trophy was originally erected in the Hall of the Gunsmiths’ Company, London, in February 1872.

The Hall was dismantled in 1927 and the trophy, except the shield containing the names of the members of the London Court who held office in 1872, which the London Company naturally wish to retain, was moved to Birmingham.

The photographs show the trophy beautifully restored to its former glory, together with the volunteers resplendent in their Proof House ties for the gentlemen and scarves for the ladies; standing in front of the trophy, prior to a splendid lunch, provided by the Guardians of the Proof House. 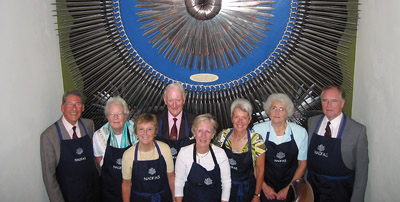 The Proof Master toasted the volunteers and thanked them for their enthusiasm and the application of elbow grease involved, in their two year project, to which Ross Bellamy responded.

The next project is the cleaning of the Silver Collection at the Birmingham Assay Office, in preparation for the bicentenary celebrations in 2009 of Mathew Boulton’s death, under the guidance of Dr Sally Baggott, the Curator, and Archivist.