Home » Art & Lifestyle » Of All the People In All the World 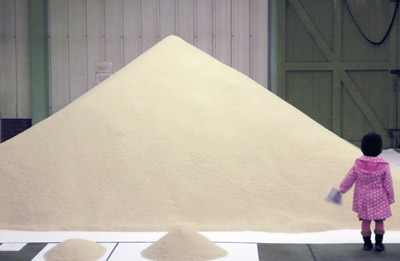 At the A E Harris Factory, 110 Northwood Street, Stan’s Cafe presents an Exhibition: Of All The People In All The World Conceived and directed by James Yarker.

The grain of rice is you. There will be a lot of other people there. Billions. Each represented by a single grain of rice. In heaps and patterns and piles: all the people in all the world. 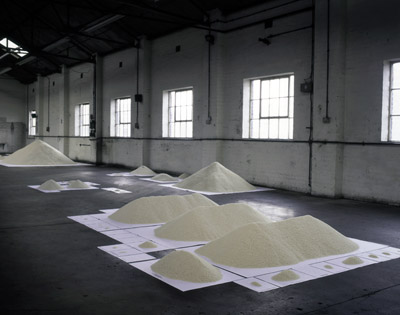 The performance straddles the line between theatre and art. Actors in lab coats meticulously weigh out rice onto sheets of white paper.

They tell a daily changing, visceral story of the world’s people and politics, using scrupulously researched statistics about current affairs, history, ideas suggested by visitors, and their own sense of the important, or the bizarre. Shocking, celebratory, witty and thought provoking, they present our planet in surprising juxtapositions that open the eye and enlighten the mind.

The number of people killed crossing the Berlin Wall 1961-1989: the number killed trying to get into the US from Mexico in one year. Those who went down in the Titanic: those involved in making the film Titanic. 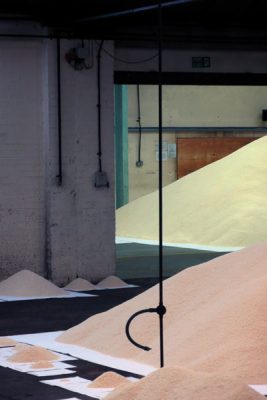 This presentation of the show has been supported by the Arts Council of England, Birmingham City Council, and the Welcome Trust. With assistance from A.E.Harris, the Sir Barry Jackson Trust and Business Link, ERDF and AWM through their support for Creative Industries in the Region.

This is only the second time Of All The People In All The World has been seen in its full World version. The first, in Stuttgart, needed only 104 tonnes of rice.

First performed in 2003 (UK version = 1 tonne of rice), the show has been presented around the world in various scales, from LA to Madrid, Melbourne to New York.

Important note – all the rice is returned to the supplier and the food chain.

Formed in 1991, Stan’s Cafe is based in Birmingham. Previous work includes: It’s Your Film, The Black Maze, and Home of the Wriggler. www.stanscafe.co.uk.