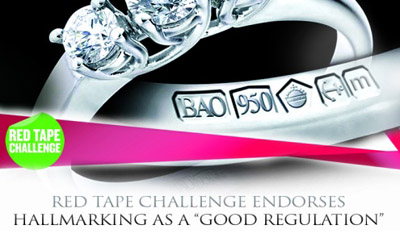 After a vigorous nationwide campaign championed by The Birmingham Assay Office the results of the first ‘retail’ round of the Governments’ Red Tape Challenge has recognised hallmarking as a “good regulation.”

Minister for Business and Enterprise Mark Prisk listed some confusing and overlapping regulations, which were to be scrapped, but said: “We are preserving good regulation, such as the hallmarking regime, for which there was strong support.”

The announcement that hallmarking is no longer under threat is good news for the UK jewellery industry as the majority of responses to the Red Tape Challenge demonstrated that literally thousands of retailers, manufacturers, designers and consumers see hallmarking as a vital piece of consumer protection. Support for UK hallmarking also came from the main trade associations, as well as politicians and other local supporters of The Birmingham Assay Office.

Current UK hallmarking legislation requires all but the most lightweight precious metal items to be independently tested and hallmarked by an Assay Office to verify their precious metal content prior to sale.

The system ensures that the precious metal alloys, from which jewellery or silverware is made, contain the requisite percentage of high value precious metal. This is an assessment which even an expert cannot make by eye. Hallmarking therefore protects the consumer and ensures that suppliers are competing on a level playing field; particularly important when precious metal prices are at an all time high.

Michael Allchin, Chief Executive of The Birmingham Assay Office said: “Inevitably The Birmingham Assay Office strongly believes that hallmarking is vital to protect the trade and the consumer and to maintain consumer confidence in our industry. We are extremely pleased that the outcome of the Red Tape Challenge has endorsed our rigorous independent regime as we believe this in the best interests of the UK Jewellery industry.

The Birmingham Assay Office has been hallmarking since it was founded by Matthew Boulton in 1773 and we believe our duties to be as important now as they have ever been.”