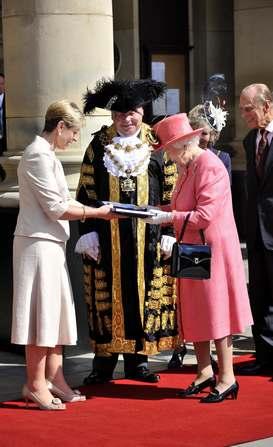 As a 4,000-strong crowd waved union jacks and cheered the royal couple in Victoria Square at the start of their visit to Birmingham, BBC presenter Kay Alexander, in her role as chairman of The Birmingham Assay Office, presented The Queen with a silver bowl designed and created in Birmingham’s world famous Jewellery Quarter by Birmingham silversmith Andrew Macgowan as a gift for the Diamond Jubilee on behalf of the citizens of Birmingham.

She was greeted by the Lord Mayor Councillor John Lines and Lady Mayoress Kathleen Lines who introduced them to the deputy leader of the council, Councillor Ian Ward, Conservative leader Councillor Mike Whitby and Liberal Democrat leader Paul Tilsley.

The Queen and Prince Phillip were shown the wicker man statue of Usain Bolt outside the Council House before signing two visitor books – one for the council and one for the Lord Mayor’s office.

Jazz band, the Jazz Ramblers, entertained the crowds along with dance troupe, the Chinese Jitterbugs.

As the Queen walked past, people were standing on the fountain and boulders, all eager to catch a glimpse of the royal couple. As the sun shone down it was indeed a proud and happy day for the whole City.