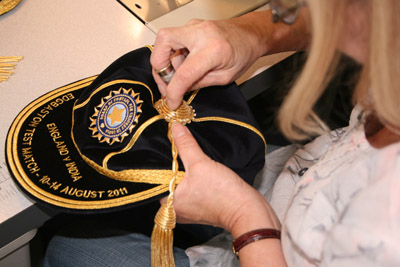 Each Honours Cap has been hand embroidered with the wording ‘England v India Edgbaston Test Match 10 – 14 August 2011’, by Rhonda Ludgate.

In addition to the Honours Caps, Toye Kenning & Spencer provided elegant glass paperweights, with a 3D view of the ground, which were presented to the VIP guests on 25 July on the occasion of the opening of the new state-of-the-art Edgbaston Stadium by the Duke of Edinburgh.

“We are extremely proud to have been able to produce the Honours Caps for the team captains,” explained chief executive, Fiona Toye. “Our craftspeople worked hard and with care to produce the caps and we hope the two captains will wear them with pride.”

The cap was produced and embroidered in Toye Kenning & Spencer’s Bedworth facility while the paper weight was produced at the company’s Birmingham factory, in the Jewellery Quarter. 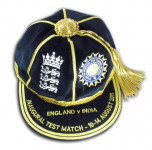 Toye Kenning & Spencer has a reputation for manufacturing distinctive and durable hand-made hats, caps, side caps and berets. As well as the Honours Caps for the cricket captains, the company also produces Honours Caps for the England Football Team and caps and hats for the civil and military uniformed services, many of which are finished with the company’s own ribbon, embroidery and badges.