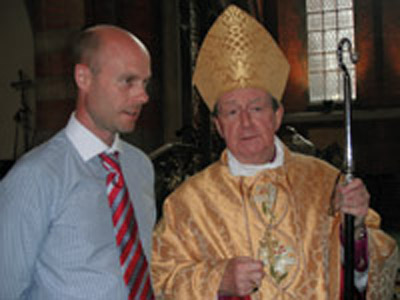 Neil Halford of Toye Kenning & Spencer with the priest of The Church of the Holy Innocents.

Gold and other threads, crafted by a division of Bedworth-based Toye Kenning & Spencer, Benton & Johnson, have been used in a stunning new full set of vestments embroidered by the congregation of The Church of the Holy Innocents, Hammersmith.

Benton & Johnson, which has its origins in the eighteenth century, has a worldwide reputation for the manufacture and supply of a wide range of embroidery, purls and threads. It became a division of Toye Kenning & Spencer in 1990.

Neil Halford, production manager for the weaving department and Benton & Johnson at Toye Kenning & Spencer, said: “It was an honour to be able to contribute to this project.

The vestments are incredibly important to the church and its congregation and so it was essential they used the very best materials. We were delighted they chose to use our gold threads and wires; it’s a testament to the expertise of our craftspeople and the care and attention they take in the production of the wires and threads.”

The Parish lacked a celebration set of vestments for the Principal Feasts because previous parish clergy had their own or used heirloom vestments that either left with the clergy or entered the collection of The Shrine of Our Lady of Walsingham.

The decision was taken to employ a skilled needleworker to create a full set of vestments in time for Her Majesty Queen Elizabeth II’s Diamond Jubilee. The dedication of the vestments has begun and will be completed over coming months. 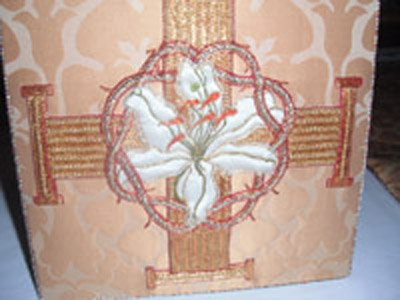 The artistic process involved so many questions and different skills: silk weaving; colour matching; cord making; tassel making; braid making; theological reflection; tailoring of the actual body of the garments; architectural awareness; an appreciation of the different styles of vestments throughout the history; knowledge of fabric and materials; prayer; and the embroidery work itself. It was a collaborative process, watched over by Ruth Chamberlin, Britain’s acknowledged exponent of gold-thread embroidery and advisor to The Diocese of Peterborough.

Toye Kenning & Spencer produces the gold wire and thread using traditional methods and machinery, thus giving it the flexibility to manufacture even very small quantities. The gold wire is produced by coating copper wire in silver and then plating it with gold. There are two common forms of gold wire.

The first, which is 2% gold, is, naturally enough called gold 2% and the second is gilt which is 0.5% gold. Toye Kenning & Spencer produces different thicknesses, drawing it down to the required diameter by repeatedly stretching it very gently through a diamond die.

The wire is converted into a flat form using a plating mill in which the wire is drawn between two rollers, up to 30 times, while gold thread is produced by spinning the wire around a cotton or silk core, with the thickness depending on the number of threads used.