Home » Art & Lifestyle » In the Making: Artist Pegs Down History 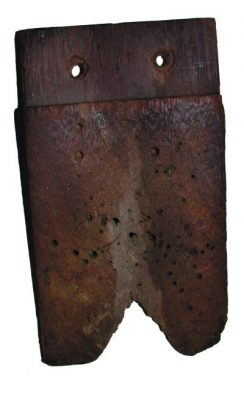 In a celebration of the skill of jewellers who have worked on everything from the FA Cup to royal regalia over tens of thousands of man hours, an integral and essential part of their profession, the jeweller’s ‘peg’, is to feature in a unique art project.

More than three years since the initial concept was devised, artist and jeweller Stephen Galloway Whitehead is now nearing completion of ‘In The Making’ – a stunning piece that features 159 pegs assembled in an instantly recognisable form, all of which have been kindly donated by working jewellers in the Quarter.

The ‘peg’ is a small piece of wood upon which jewellers place their work whilst filing, buffing, drilling or hammering. Due to the huge variety of work that takes place and individual styles, no two pegs are ever the same in size or shape. Some may last less than a year due to wear and tear while others may be the companion to an individual jeweller for a matter of decades.

The oldest peg featured was first used in 1903, the newest by a student earlier this year, but every peg tells a story and the details of each owner have been carefully documented. ‘In The Making’ will then act not only as a flexible attraction, but also as historical document that can be used for education, tourism and business showcasing purposes for years to come.

Commissioned to do the piece by ‘The Big Peg’, the Jewellery Quarter’s centre for arts, media and creative commerce which houses more than 150 businesses, Stephen Galloway Whitehead saw the project as something extremely exciting.

He said: “As a jeweller myself, I am very aware of the important role that the Jewellery Quarter plays in the framework of the city, along with the wealth of characters it possesses. As an artist, I wanted to express and document this amazing place and the people within it.”

The piece will be launched at a special event at ‘The Big Peg’ on Friday 6th December 2002 and all the jewellers who have donated pegs will be invited to attend. “The jewellers are the real stars of this work,” explained Stephen, “So they will be the stars of the launch. This piece is something that can easily be expanded upon and I’m keen to ensure that this is only the first stage of something that will develop in future years. In order for this to take place though; we will need to receive further funding from local businesses and organisations.”

Donations to the project have already kindly been made by the Jewellery Quarter Regeneration Partnership, Cookson Metals, Weston Beamor, The Big Peg and The Training Quarter. Anyone wishing to lend support either with financial contributions or donations in kind should contact Stephen Galloway Whitehead on 07946 432452.