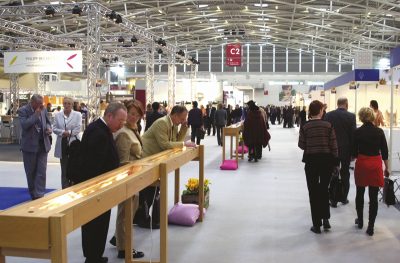 Although the participants at the fair tended to be rather cautious in their assessment of the current economic situation, they were very pleased with Inhorgenta Europe 2003 (21 to 24 February).

A particular feature was the rise in the number of trade visitors from abroad, which created an audience of wide-ranging international business contacts. Against the difficult market conditions on their home market, many German exhibitors are pinning their hopes on an upswing in exports and good follow-up business after the fair.

There were again around 30,000 trade visitors (2002: 30,411), and the 30th International Trade Fair for Watches, Clocks, Jewellery, Precious Stones, Pearls, Silverware and their Manufacturing Equipment, proved to be a stable, important information forum for the sector. Over three quarters of the 1,201 exhibitors (2002: 1,348) from 40 countries (2002: 51) praised the excellent atmosphere at the fair and its status as a leading fair. “Inhorgenta Europe went very well,” said Manfred Wutzlhofer, Chairman & CEO of Messe München, “and it once again proved to be a platform that gives key impetus for business in the coming season.”

For many British market partners, this is the most important trade fair.

Spectrum London, a specialist in platinum jewellery, exhibited at Inhorgenta Europe for the first time this year. Sally Rose thought “the organisation was great – our stand was ready and waiting for us and everything was as we wished.” 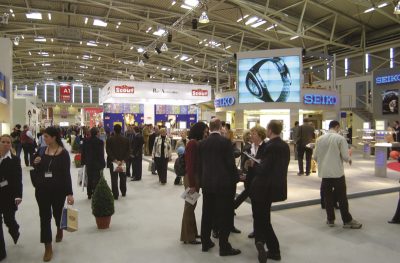 Another exhibitor new to Inhorgenta Europe, Graham Tom, managing director of Graham Tom Design, commented “It was a good show for contacts, and a good experience. We had a really nice stand and the showcases lent themselves perfectly to our products. I appreciate the German ethos and we are developing an online jewellery service with our German partners We will be back next year.”

Inhorgenta Europe has also built an excellent reputation for its Innovation Forum, where you can find exciting designs from all over Europe. One of the recent Inhorgenta Innovations prize-winners, jewellery designer, Gill Galloway-Whitehead was back at Inhorgenta Europe this year. She says, “I had a really good show. It was very interesting – the buyers were there and I was very happy. A few galleries who saw me last year came back again to my stand this year, so I was able to build on existing contacts.”

Around 570 British trade visitors came to Inhorgenta Europe, including a number who purchased the new Inhorgenta GoldCard, giving them various benefits, such as entrance every day of the fair without queuing, free shuttle bus rides from the airport to the trade fair and back; use of the stylish Inhorgenta Europe GoldCard Lounge; newsletters and discounts; and last but not least, express registration to other international trade fairs.
A survey revealed that exhibitors rated Inhorgenta Europe very positively in all key criteria.

The rating ‘excellent to good’ was given in particular to the atmosphere at the fair, its leading trade-fair status, the quality and international range of visitors, visitor frequency, and the presence of top buyers. The proportion of these very positive ratings has risen as compared to last year. Also, more exhibitors this year gave the highest ranking of ‘excellent to good’, thus expressing their satisfaction, to those criteria connected with how well they had achieved their main goals, namely paving the way for new business contacts, preparation of follow-on business, direct agreements concluded at the fair and the chance to intensify existing customer relations.

Three quarters of exhibitors gave this highest ranking to this latter criterion of intensifying existing customer relations, and well over half, i.e. 60 percent, to the aspect of preparing for follow-on business.

Almost two thirds of exhibitors gave Inhorgenta Europe the rating of ‘excellent to good’ as their overall assessment of the fair, and here again, the proportion of exhibitors, particularly those from abroad, giving this positive rating has risen as compared to last year. Special mention was made by exhibitors in their overall assessment of the fair’s sections on pearls, silver jewellery, watches and platinum jewellery. While the assessment of the current situation in the sector remains predominantly sceptical, nevertheless around half of the exhibitors said that the order status in their own company was ‘excellent to good’.

Dieter Hahn, owner of Philipp Hahn Sohne, Idar-Oberstein, and Chairman of the Advisory Board to Inhorgenta Europe, backed up this positive assessment of the fair from the perspective of an exhibitor: “We were able to win important new partners from Moscow, Shanghai and San Francisco, and we feel sure we can expect positive follow-up business after the fair.”

This opinion was shared by Barbara Windisch for M. Frey-Wille: “Inhorgenta Europe was for us a great success. We were particularly pleased with the increase in our new-customer business.”

The broad international scope among the trade buyers attending the fair was confirmed too by Christian Coenen, Sales Manager Watches and Jewellery at Fossil Europe GmbH, a company that makes use of Inhorgenta Europe to present all its new products and marketing programmes for the retail trade: “We had customers from over 15 countries, for example, from Scandinavia, Central and Eastern Europe, the Benelux countries and France, and we are very satisfied with how the fair went.”

This assessment, shared by many international operators, was also reflected in the review by the spokesmen for the trade and industry associations in Germany. Dr Alfred Schneider, Principal Managing Director of the German trade association for jewellery, watches, silverware and associated industries (Bundesverband Schmuck, Uhren, Silberwaren und verwandte Industrien e.V.) of Pforzheim, said that the German exhibitors he represented had reported that trade buyers had been primarily gathering information on the ranges, and some had been ‘ordering nicely’. Dr Schneider: “The good contacts made at the fair indicate positive follow-up business.”

Bodo Jonda, Managing Director of trade associations of watch and jewellery retailers, of Künigstein, said: “Expectations of this fair on the part of the German retail trade were more than fulfilled, against the present economic background. The mood was very good. The most important thing was information on new trends and products.”

The section on technology had also been very well received. Jonda: “The retail trade is relying on the strengths of the workshop area.” Speaking for the German industry association for diamonds and precious stones (Bundesverband der Edelstein- und Diamantindustrie e.V.) of Idar-Oberstein, the Managing Director Jürg Lindemann also expressed “justified hope of good follow-up business.”

While these statements by the trade associations were a reflection of the overall economic situation, the spokesmen for the companies focused on the specific targets and strategies that they were pursuing with their presence at the fair. Speaking for the Egana-Goldpfeil Group, Managing Director Matthias Klein declared: “We were able to conduct constructive and target-oriented talks that confirm our status as a strong partner of the retail trade.”

Harald Hepperle, Managing Director of Junghans Uhren GmbH, which is a part of the Egana-Goldpfeil Group, added: “The good mood which had already been sensed at Junghans before the fair, was fully borne out at Inhorgenta Europe.”

Junghans is focussing on providing a full range to the retail trade. According to Hepperle this was the key to noticeably boosting its business.
The initiative to encourage trainees and new entrants to the trade is part of an extensive accompanying programme at Inhorgenta Europe for information, innovation and the gaining of expertise. 14 universities and trade colleges from Germany, Italy, Poland and Scotland took part in the trainee programme which offered students and trainees an insight into the industry, the retail trade and sales in the watch, clock and jewellery sector. The Inhorgenta Innovations Prize for outstanding and future-oriented jewellery design was awarded for the fourth time. The pieces were part of a special display in Designers’ Avenue in Hall C2.

The various jewellery exhibitions also attracted particular attention from the trade, for example, the Diamond Trading Company’s display of ‘Diamond Passion’ featuring the most beautiful diamond jewellery pieces from all over the world.

The new special exhibition ‘brand new – new brand’ gave 20 young jewellery designers the opportunity of presenting their products in a professional setting at an international trade fair. The special ‘Silver Summer Gallery’ display, put on by the Nuremberg Academy of Fine Arts, once again exhibited outstanding silverware in an exciting atmosphere.

The special B2B character of Inhorgenta Europe was underlined in the trade seminars, debates and special presentations at the fair. The focus was on current themes in the sector and in marketing, such as trade information on cultured pearls, shop window displays, diamond cuts and lifestyle trends.

The next Inhorgenta Europe takes place from 20 to 23 February 2004 at the Munich Trade Fair Centre.