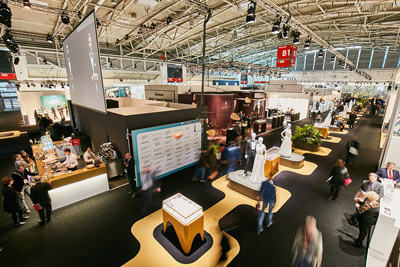 Individual! Inspiring! Innovative! – that is the brand image conveyed by Inhorgenta Munich. On the four days of the trade show, which will take place from 18 to 21 February 2017, there will once again be the opportunity to gather and exchange information about new products, trends and developments in the jewellery and watch industry.

In spite of Brexit and other trouble spots in the world, the number of bookings received so far considerably exceeds that of the same period of the previous year, namely by 15 percent.

After extremely successful trade show days at the 2016 event, boasting 940 exhibitors from 33 countries and some 26,000 trade visitors from 75 countries, those responsible for Inhorgenta Munich are full of anticipation for the coming year’s event. With good reason: the team around Exhibition Director Stefanie Mändlein records a plus in the booking status amounting to 15 percent compared to the same period of the previous year.

Among other things, Stefanie Mändlein ascribes this increase to the new exhibition hall concept implemented for the first time this year: “We just could not go wrong by restructuring the Halls B1 and A1. Immediately after the event, many customers felt that the new concept pleased them a lot. Of course, such feedback is always very welcome. But it is even more rewarding when this popularity can be expressed in figures. This is an enormous incentive for us.”

Munich will be the hub of the jewellery and watch industry once again from 18 to 21 February 2017. In future, however, Inhorgenta Munich intends to offer its customers more than just a platform once a year. “From now on, it is all about positioning Inhorgenta Munich in such a way that it is not only
perceived as a four-day trade show but as a driving force for the entire industry – on 365 days a year”, states Stefanie Mändlein.