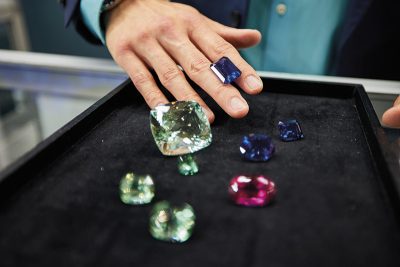 Idar-Oberstein. After three exciting and eventful days the Intergem 2022 closed on a positive note at Messe Idar-Oberstein, in spite of the difficult situation in the sector. Some 90 exhibitors from 10 countries presented their premium jewellery creations and an enormous range of diamonds, pearls, and coloured gemstones to an interested trade audience.

The increase in internationality was no doubt aided by the presence of Katerina Perez. The trained gemmologist is a key international influencer and blogger for premium jewellery and the accompanying trendy creations.

Katerina Perez was also present at the Intergem 2021 and accompanied the fair with her social media activities. At the Intergem 2022 she curated, compiled, and moderated the Intergem jewellery shows, streaming them live on her channels to her over 400,000 followers.

Katerina Perez in interview with the Rhein-Zeitung on the collaboration: “I think that all those familiar with the world of jewellery and gemstones will have heard of or visited Idar-Oberstein. For a while, I only knew that it was a hub for gemstone traders, cutters, and engravers, it was only a matter of time before I came by in person. Thanks to Intergem, last year I visited for the first time and now I was back at the fair again for another edition. I really liked the Long Night of the Gemstones, where visitors could discover the treasures that Idar-Oberstein has to offer.” 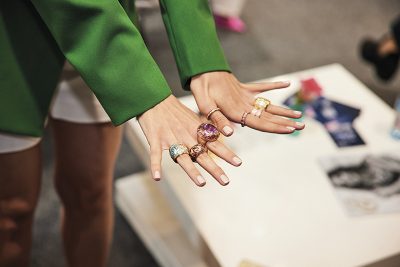 The support programme at the Intergem 2022 as a whole was well received. In addition to the jewellery shows by Katerina Perez, this included a focus on the aspect of sustainability, which found a particular resonance with the Intergem Round Table. Here Dr. Konrad Henn from the Karl Faller company reported on the experience and learnings from the ongoing certification process.
A special highlight this year was the premiere of the “Long Night of the Gemstones”, which was organised and took place in the scope of the Intergem for the first time. On the Saturday evening of the fair the six prominent institutions and locations of the jewellery and gemstone sector in Idar-Oberstein opened their doors in a pleasant evening ambience with accompanying musical and culinary programme.

They enabled unique insights unto the long history of the jewellery and gemstone industry in Idar-Oberstein as well as the current state of the art in research and science.
The offer was free of charge for trade visitors and citizens of the region and was also aided by an Intergem shuttle service to the sites. Taking part were the Deutsches Edelsteinm-useum, the Weiherschleife, the Steinkaulenberg, the Deutsches Mineralienmuseum, the Jakob Bengel Industrial Monument, and the Gemmologisches Institut. Interest in the Long Night of the Gemstones far exceeded expectations.

The Edelsteinmuseum alone welcomed over 300 visitors. All tours of the Edelsteinmuseum, the Jakob Bengel Industrial Monument and the Steinkaulenberg were fully booked. Over 100 visitors attended the Jakob Bengel Industrial Monument. At the Gemmologisches Institut 50 interested visitors were informed about the latest status regarding research. This served to establish a link between the Intergem and the city and region.

Exhibitor impressions of Intergem 2022:
“Saturday was very mixed, Friday and Sunday considerably better.” The assessment of Thomas Fürstenberg-Franzmann, managing director of Herbert Fürstenberg e.K. in Idar-Oberstein, of attendance over the three days. Taking into account covid and the other crises that are currently affecting not only Germany, the interest in the Intergem and on his stand was actually better than expected. Customers in the German market are less willing to buy than elsewhere. “I have more to do in the rest of Europe than here. Our French customers have a lot of work,” says Fürstenberg-Franzmann.

Iris Arnold, managing director of Novitas Diamonds (Frankfurt): “Diamond earrings were in particular demand at the Intergem 2022. Novitas Diamonds is looking to make a name for itself as a sustainable brand on the German market. The company began its operations in Australia, this year we also became active in Europe. The fair in Idar-Oberstein is a building block for accessing German customers.”

Like Novitas Diamonds, Sadruddin Jewellers was present in Idar-Oberstein for the first time. “This is a new experience for us,” says Amin Uddin, on the stand of Sadruddin Jewellers. There are currently a lot of problems. But the aim is to build upon the brief appearance this year. Next year the intention is to have a stand at the Intergem again.

Dr. Konrad Henn, of Karl Faller: “There were no complaints about the support programme and organisation this year, quite the opposite: There was a lot of praise for Mirko Arend and his team,” says Henn. The Long Night of the Gemstones met with an enthusiastic response: “We had some visitors who were annoyed at not having taken part. They asked if it will be offered again next year.”
At Karl Faller and Groh und Ripp the Intergem was a positive experience. On Saturday Heike Faller even had a new buyer from the US who had travelled to the Intergem 2022 especially.