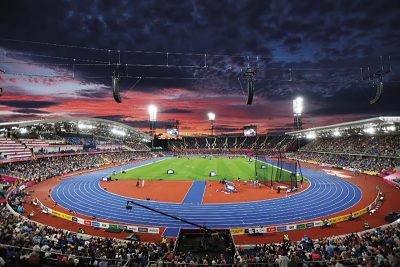 Alexander Stadium during a night-time session during the 2022 Commonwealth Games.

A plan to secure a lasting, positive, legacy for the renovated Alexander Stadium and surrounding parkland after the Commonwealth Games is due before the city council’s Cabinet on October 11.
The full business case (FBC) for the £21million of legacy developments aligns with the wider Perry Barr 2040 masterplan, which was formally approved earlier this year.
In a report to Cabinet members, the Alexander Stadium and Perry Park are described as being at the heart of the area’s regeneration – which is seeing more than £750million being invested in new homes, improved highways and public transport links as well as the delivery of community facilities and infrastructure.

Access to high-quality facilities for sport and recreation is cited an important aspect of the future vision for the area, and will be realised through the FBC as follows:

The council is also working with Birmingham City University (announced as a new tenant for the revamped Stadium back in 2019) and other future tenants on the offering for elite and community sports provision in the Stadium complex, including the neighbouring High Performance Centre.

Work to remove the temporary overlay and structures that were put in place for the Commonwealth Games is ongoing.

Some activity, such as gymnastics classes at the Gymnastics and Martial Arts Centre, has already resumed at the wider Stadium site, which is also home to Birchfield Harriers athletics club – whose members will benefit from the new world-class facilities too.

If approved, the programme of works within the FBC will be carried out in phases, that will be completed between early 2023 and spring 2024.

The FBC and related Cabinet papers can be viewed on the council’s website.