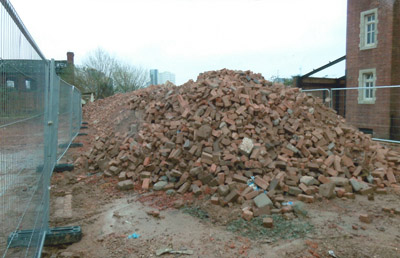 Camden Street School, whose pupils included Kathleen Dayus (Author) and Alice Beach (cameo setter whose collection is housed in the Jewellery Quarter Museum) has now been completely demolished. However, it does open up the Dayus Square giving some light to Manton Works – shame that open space will not last for long. Photo: Colin Giles

Lots of new apartments are being built in Legge Lane, but generally speaking most have little or no vehicle parking provision. This is fine if the new occupiers don’t have cars but if they do stand by for parking chaos!

200 New Apartments at 2-25 Legge Lane: 100 Apartments
This was the site previously owned by the Birmingham College of Food and Tourism and has been derelict for around 30 years.

Part of the building is Grade 2 Listed and is in the Industrial Fringe where under the current Jewellery Quarter Conservation & Management Plan ‘residential use only’ build is allowed, although it must comply with the current Design Guide, building height etc.

The project has been designed by Digbeth practice D5 Architects and will contain 67 one-bedroom and 33 two-bedroom units, no parking for vehicles but 104 spaces for bikes in a building reaching up to four storeys.

78 Apartments on Pay & Display Car Park
City property developer Court Collaboration has secured a consortium of Chinese and Taiwanese investment to build 78 apartments on the pay and display car park and neighbouring land, also in Legge Lane. This site is again within the Industrial Fringe. where ‘residential use only’ build is allowed. 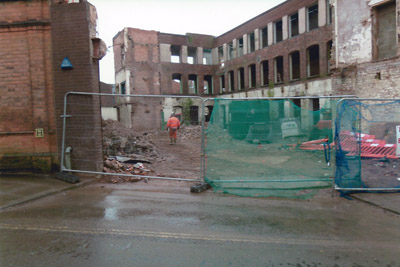 Walker Wood (Pencil Manufacturers) in Legge Lane has also been demolished. After the buildings were surveyed, it was declared that both buildings were beyond repair. These particular buildings were on our ‘Chamber of Horrors’ List for many years. Photo: Colin Giles

22 Studios & Apartments at 3-5 Legge Lane
Stourbridge-based Kendrick Homes is part-demolishing and part-renovating the former Ashton & Moore anodising factory which dates back to the 19th century, and building four commercial units and a mix of 22 studios and one and two-bedroom flats.

The terracotta building is Grade 2 Listed and, together with the surrounding land, has held a Contamination Certificate for many years for both the building and the land surrounding.
This site is within the Industrial Middle, hence the commercial units.