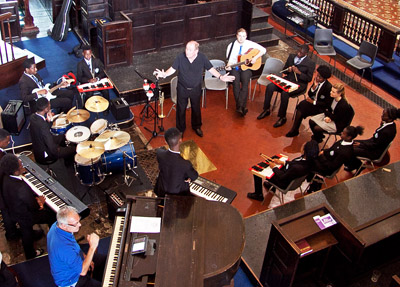 Following previous Jazz Festivals where Anna was a main organiser, she was again approached by Digby Fairweather in connection with the 2015 Jazz Festival and it was agreed that it would be a great idea to involve Perry Beeches II this year, as they had a good music department at the school.

Perry Beeches II agreed readily and a ‘Jazz workshop/concert’ with Digby Fairweather and PB11 was arranged for the morning of 10th July. 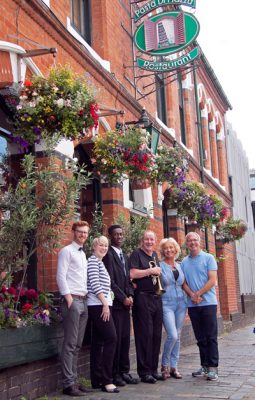 After the event, Anna told The Hockley Flyer: “Although I say it myself it was a truly inspiring Jazz Master Class workshop at Perry Beeches II.

Exceptional talent emerged as Digby Fairweather and Mark Wallace put students through their paces rounding up with a half hour concert showcasing stars in the making.

Notably, Rean Parchment, gave a solo performance on the piano accompanying Digby who was bowled over by such raw talent. An outstanding music student to look out for!

Sponsor, Ronnie Ferro, owner of Pasta di Piazza and Cucina Rustica said: “We’ve been very much a part of the local community for many years and as part of us celebrating our 20th Anniversary in the Jewellery Quarter, I felt it was a great opportunity to help the school ‘s musical students benefit from some of the brilliant musicians who were in town for the Jazz Festival.’