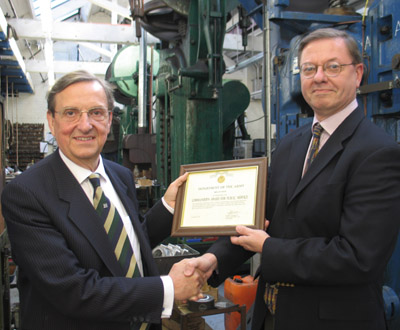 Bryan Toye, Chairman of identity products manufacturer Toye Kenning & Spencer based in Birmingham, has been presented with a prestigious medal by the US Army in recognition of his services to the US Army based in the UK.

Colonel Stephen Broughall Jnr, Head of Technical Procurement to the US Army in Europe, visited Toye’s factory in Birmingham’s Jewellery Quarter to make the presentation. Colonel Broughall congratulated Mr Toye and commented that the award is rarely made to civilians.

The citation reads: “Commander’s Award for Public Service. For exceptional meritorious service in support of the United States Army personnel stationed in the United Kingdom from 2004 to the present.  Your efforts on behalf of the Anglo-American special relationship are a superb example of transatlantic co-operation and reflect great credit upon yourself and your organisation.”

Bryan Toye, who this year celebrates 50 years with his family firm, hosted numerous visiting US Army personnel when they were in England. He has associations with several UK Army reserve units and is particularly proud to be the Honorary Ordnance Officer at the Tower of London.

(Note) Toye Kenning & Spencer traces its history back to an immigrant French weaver, Guillaume Henri Toye, who set up in the east end of London in 1685 making accoutrements for military uniforms. Bryan Toye is a direct descendant of the founder.

The Toye group creates identity products for military and civil markets, and have manufactured military accoutrements for over 300 years. Today the company combines craftsmanship with modern technology to produce a wide range of uniforms, accoutrements, accessories, and equipment.